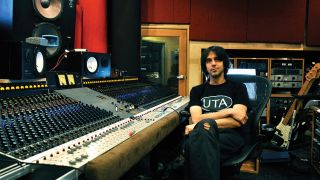 Eric Valentine: "The thing that is most striking about Dave Grohl's playing is how consistently he hits the drums."

In the February 2014 issue of Rhythm - available as a back issue for iOs and Android - our monster cover feature looked at the stories behind 10 of the most iconic drum sounds ever recorded and how you can create them yourself, with audio and video examples, mixing techniques, miking ideas and more!

As part of the feature we spoke to some of the drummers, producers and engineers involved in the tracks to add their expert take on things. We got so much information we couldn't fit it all in the magazine, so here we present some bonus material - deleted scenes, if you will.

In this interview, Songs For The Deaf engineer Eric Valentine talks about working with drum icon and Foo Fighters frontman Dave Grohl on the Queens Of The Stone Age classic No One Knows, talking specifically about the problems they faced recording the drums and cymbals separately.

Was there a particular magic ingredient when recording 'No One Knows'?

"Obviously, like any amazing recording, it's primarily the room and the drummer. One of the standout things for me about [Dave] is how he mimics the length of the guitar notes with the hi-hat open/closed pressure.

"The thing that is most striking about Dave Grohl's playing is how consistently he hits the drums. He plays very hard, which in a lot of cases does not necessarily result in the best drum sound. Because Grohl hits so consistently it is much easier to accommodate the really hard playing. I have heard people speculate that there are samples layered in with the drum recording. There are definitely no samples. Grohl just plays with inhuman consistency."

Where exactly were the drums recorded for the track?

"The drums were recorded in a small isolation booth. It was roughly 8'x12' but not exactly a rectangular shape and the ceiling was quite tall (16'). It was very dead acoustically. It has curtains and cork on the walls and carpet on the floor. The idea was to have a room sound that still sounded very tight, focused, punchy and kind of claustrophobic. I used a pair of Sony C37A microphones for room mics. They were positioned up high - maybe about 12' up. I would just move them around in the room until they both sounded balanced between the kick and the snare and were roughly equal distances from the snare drum."

The drums were recorded separately to the cymbals. How did you practically go about this?

"QOTSA had done it on the previous record and wanted to try that approach again. The advantage of doing this is that it allows a lot more flexibility in how you can mic the drums. This time we actually set-up electronic cymbal pads for Dave to play when doing the initial pass when all of the drums were recorded. Having cymbal pads to hit made it easier for Dave to play the way he normally would and allowed all of us to hear some sort of cymbal sound while everyone was playing. It did sound pretty ridiculous before we replaced the cymbal samples with the real ones.

"After all of the drums were recorded for all of the songs, we set up to record just the cymbals. We set up a dummy snare and toms that were padded to be as quiet as possible for him to hit while playing the cymbals. This way he could simply replay the same drum parts and only have the cymbals be captured by the mics. Overdubbing the cymbals separately is very difficult. Dave Grohl is an extraordinarily positive guy with a seemingly endless reservoir of energy and enthusiasm for playing drums. Even he at one point started to get frustrated with overdubbing the cymbals on 10 plus songs. He got through it and obviously did a great job.

"There is the trade off [with this method]. You can do some cool miking stuff when the cymbals are separated, but you risk having the cymbal sound disconnected from the overall drum performance both sonically and with the feel.I have not chosen to do the totally separate cymbal thing again. I don't think the trade off is worth it."

Want your drum recordings to sound like Dave Grohl on No One Knows? Find out more in the Feburary 2014 issue of Rhythm for iOs and Android?