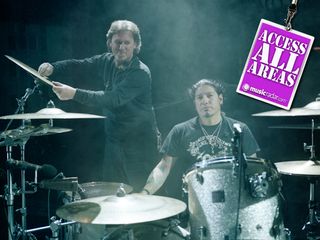 The latest in a series that has so far included U2, The Killers and Slipknot sees us check in with the drum tech for hard rockers Buckcherry.

Buckcherry are known for their riff-drenched rock and insanely catchy tunes, as well as their hard-hitting drummer Xavier Muriel. An arena band in the States and a festival favourite in the UK, Buckcherry are the party band that everyone loves.

Drum tech Terry Gray has a blast working for the heavily tattooed American rock 'n' rollers, and ensures that anything Xavier needs is covered. "I've been tech-ing for Buckcherry for a little over six years now, and drums are the only instrument I have tech-ed."

A versatile tech in terms of genres, Terry has also hit the road with reggae band Steel Pulse. "I toured the Caribbean, South America and Central America with them while Buckcherry took time off to record Black Butterfly."

With Buckcherry hitting the festival circuit once more, Terry walks us through his job looking after Xavier, which includes "setting up, tearing down and maintaining his drum kit; ordering sticks, cymbals and drum heads, as well as line checking the kit."

Do you rent much gear when Buckcherry play European festivals?

"Touring abroad for us does means rental gear, and sometimes the hardware can be a little used and abused because Xavier is a hard hitter and tends to break things quite a bit. So the majority of problems I have to deal with are usually equipment failure. I carry a lot of hardware parts and spare cymbal felts, as well as wing nuts and as many tools as I can fit in my tech box."

What does your day involve when tech-ing for Xavier at a festival?

"My show day begins with dumping the gear and setting up the kit on the riser, and changing the heads and tuning them. I'll put a warm-up pad and sticks in the dressing room for Xavier, then just before they go on I'll set out set lists on the drum riser for Josh [Todd] and Xavier, along with towels and water.

"We do a quick line check before the band comes on while the intro is rolling, then they will walk on stage and I'll plug Xavier into his in-ear pack.

"I sit next to the riser behind the bass cabinets during the show and watch Xavier for monitor adjustments. I also watch the kit for anything breaking, moving or falling.

"After the show I unplug his in-ear pack and start tearing down and packing up the gear. Once the trailer is packed I go find Xavier, we crack a beer and go watch the other bands."

What has been your best, and worst, festival experience to date?

"One of my best festival experiences would have to be the first time we played Download. Just standing on that massive stage when they opened the gates and we watched all those people come running over the hill to the stage.

"My worst festival experience took place in the states, at a festival in Memphis, Tennessee. We flew in from a show in Seattle about two hours before the show, rushed to get set up and the sound guy had the monitors patched all wrong, so every adjustment made messed up something else.

"Xavier was screaming at me for the first couple of songs. I realised that they weren't going to get it fixed quick enough, so I told him to pull one of his in-ears out and I had them flood the drum monitor behind him with guitars and vocals just to get him through the show. I tell you one thing, that hasn't happened since!"