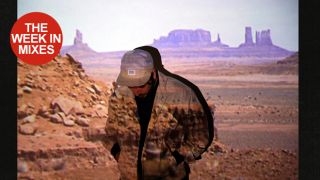 Once again, we've plundered the depths of the internet's wealth of streamable music content in order to bring you our top five online DJ mixes. Check out our picks from the past seven days below.

Ahead of playing Solid Steel's 25th anniversary party next month, Four Tet has put together a two-hour mix comprised entirely of unofficial edits and unreleased club bootlegs. Celebrating, in his words, "the tradition of DJs extending and rearranging to make things work in their sets", the mix makes for a fascinating insight into the DJ toolbox of one of modern dance music's most celebrated names.

This latest Resident Advisor podcast comes from New Zealand-based drum'n'bass head turned sonic experimenter Fis. It's an often-beatless affair, comprised entirely of his own productions interspersed with snatches of reverb-heavy percussion and tons of atmospheric synths. Hardly one for the club, but an excellent demonstration of Fis' impressive skillset as an electronic musician.

German producer and DJ Marcell Dettmann is known for his particularly refined and uncompromising brand of bare-bones techno. So this mix for Germany's Groove magazine - comprised largely of '80s and '90s electronic, new wave and synth pop classics - is something of an interesting curveball. Dettmann describes it as (in rough translation), "like a radio mix I would like to hear, for example, on Sunday, when I fly home after a gig." Head over to the Groove site for the full tracklist.

It's hard not to love the work of Spanish producer John Talabot. Both as a producer and a DJ, he approaches house music with a really delicately melodic and refined touch. His DJ Kicks mix is as lovely one would expect. It cruises along at a relaxed pace, taking in fuzzy, Balearic-tinged house, hints of disco, and dub-like synths across the course of its pleasantly meandering journey. The mix is streaming ahead of its commercial release over on Pitchfork, and is well worth a listen.

British artist Paul Lynch (aka Slackk) is something of a grime connoisseur. He's the man behind online pirate radio archive Grimetapes.com, and one of the most prominent players in the current resurgence in instrumental grime that's happening in the UK right now. His also uses his Soundcloud page to host monthly mixes, which are unfailingly brilliant, and provide an ever-reliable source of fantastic, synth-heavy electronic music.