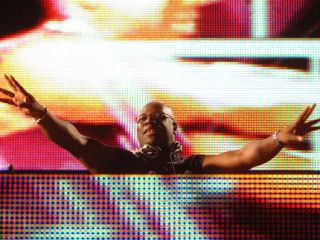 Carl Cox has a new album on the way (his first in six years), and like many artists these days, he's come up with a novel way of releasing it.

All Roads Lead to the Dancefloor will arrive on USB stick, but it's a USB stick with a difference. The idea is that the album will be released in three phases, and the flash drive will update automatically as more material becomes available. The content on the stick will be browsable via what's being billed as a "stunning interface".

What's more, it's not just the album that's being offered. Those who buy the stick will also be able to access additional album remixes, exclusive sets recorded from Space Ibiza, video interviews and behind the scenes video footage of Carl on tour, and even real-time video streams from Carl's gigs.

"I'm asking people to buy the USB, and I'm promising that with the singles, the videos, the actual album, plus all the extras - they won't be disappointed," says Cox. "I didn't want to just put it [the album] online and let that be that. I've spent too long on it, and it's too important to me to be degraded that way. I wanted to do something special with this release, something really forward thinking, and I think we've achieved it."

All Roads Lead to the Dancefloor was recorded in Carl's Melbourne studio. Its 20+ tracks promise to cover a lot of stylistic ground, including vocal house, dubstep, drum 'n' bass, Latin and techno.

"This album is aimed purely at the dancefloor," says Carl. "Every track should be a winner too as I've been road-testing and remixing them to make sure they really do work."

The USB stick will be available from 1 August priced at £20. More details are available on the Carl Cox website.