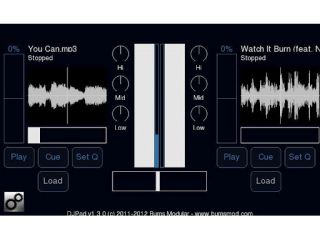 DJPad: get in the mix on your Android tablet.

MusicRadar is often asked why it doesn't cover as many Android music making apps as it does iOS ones; the simple answer to that question is that there are nowhere near as many to cover. But new releases - such as this DJing app for Android tablets - do continue to drip through.

DJPad appears to conform to a pretty standard layout, and enables you to mix and scratch two MP3 files. 3-band EQ, a multitouch mixer and crossfader, a waveform view and a split output for headphone cueing are also options.

The full DJPad can be purchased for $2.99 on the Android Market; DJPad Lite is an ad-supported free version.