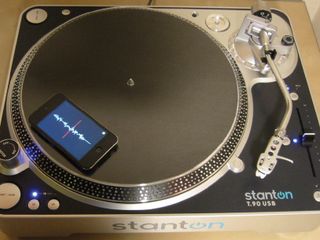 Mopho DJ puts a whole new spin on the concept of iOS DJing.

A researcher at Stanford University has come up with one of the most inventive musical uses for an iOS device that we've seen thus far - as an alternative to timecoded vinyl systems.

The Mopho DJ concept, which is still very much in development at the moment, is the work of Nicholas J Bryan and involves taking a pair of decks and placing an iPhone/iPod touch on each of them. These then send accelerometer/gyroscope data to a computer running a piece of dedicated mixing software as the turntables spin.

Using this setup, you can use the decks to manipulate the digital audio playback in real time, thus enabling wireless scratching.

Check out the video above for a demo, which we think is pretty impressive. A paper on Mopho DJ will be presented at the NIME (New Instruments for Musical Expression) conference in June.