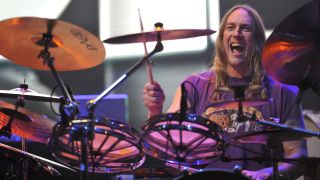 Legend Of The Seagullmen could easily end up becoming your favourite supergroup of 2018.

“I grew up on crazy prog stuff and this is just an extension of that,” explains Carey, ahead of next month’s debut self-titled album.

“It’s like a vision beyond… not just another stupid band playing songs. For us, there had to be something beyond that, like a theme or some kind of strange lore.

“Anything to help us delve a little deeper, when it takes you somewhere to the point where you can feel good and bring back something. It’s like having a bigger conversation while also having fun with my bros, because we’re connecting over something that’s completely ridiculous. It’s a very wet record when you think about it, haha!”

Staring at a track-listing featuring titles such as The Orca, Curse Of The Red Tide and Ballad Of The Deep Sea Diver, the drummer’s words echo with a ring of truth.

Also on the line is guitarist Jimmy Hayward – arguably more known for directing Jonah Hex and Horton Hears A Who! and working on blockbusters like Monsters, Inc. – who fills us in on how the Seagullmen first crossed paths and discovered their new calling…

“Danny and I have been jamming and hanging out for years,” he reveals.

“We listen to a lot of the same shit and love each other’s stuff. Brent’s our close friend, I love his band [Mastodon] who I’d done a movie score with in the past. Our other guitar player Tim [Dawson] has worked with Danny and so has Pete, though it was our singer The Doctor who came up with the concept. There’s an organised principle that we gather on and then get sucked into a musical conversation that draws from all our crazy influences, putting it all into this big stew.”

For Danny, one of the most prevailing influences throughout his three decade-long career has come in the form of King Crimson. The English progressive rock masters were pivotal in evolving music into new territories, creating sounds the world had simply never heard before…

“Those Crimson guys, they were the heavies of that era!” chuckles the sticksman. “They felt dangerous. We had them come out and open for Tool because when they weren’t doing that well or whatever - and to return the favour, they had my other band Pigmy Love Circus open for them.

“Those guys have hearts of gold. You’d think they’d be snobby dicks but every night we played, Robert Fripp would be the one stood there on the side of the stage, digging it because we weren’t syncing to some bullshit like so many other bands. We were actually playing live. It’s a sad thing when almost every band you see isn’t playing doing that, it’s the clicks and backing tracks that are keeping time. I’ve never played to a click on stage in my life…”

Considering it’s one of the greatest living drummers on the other end of the phone, we can’t help but wonder if this is where he sees most players going wrong…

“You have to put yourself in this environment that’s vulnerable and just fucking go off in the moment,” says Carey, stressing how it’s improvisation - which struggles to exist in more quantised or regimented performances - that’s key to musical enlightenment.

“Most of the Tool stuff is pretty composed, so doing a song like The Fogger on this debut was neat,” continues Carey.

“I’m pretty proud of the solo because it was done in one or two takes. I can sit back and say how glad I am it got tracked, I guess the hard part is I’ll never really remember what the hell I did! If we go multi-platinum and loads of people end up listening to us, I will have to learn it for everyone. You sell that many copies, you owe it to the people, haha!”

“Honestly, I like being cast in the moment and not knowing what the hell I’m going to do,” he adds, of those fight-or-flight moments where magic is born.

“Because that’s when something will come out of your ass and you’ll do something you’ve never done before. Those late ’60s/early ’70s bands would take it really far out and get super-weird. Even early Judas Priest was pretty fuckin’ weird, when you listen to it. That’s what we’re trying to bring back - there was more dedication to your vibe back then. I just loved the commitment.”

There’s certainly no lack of commitment from these rock ’n’ roll sailors – and with someone like Hayward serving in their ranks, they’re able to look the part as well as sounding it. It’s something they take great care in, he tells us, from their videos to the stage…

“We have the outfits when we play live; we’re never going to be wearing house shoes and daisy dukes. It’s like a formal dinner with us, man, and we always show up in a fucking tie! The visuals don’t necessarily always completely relate to the music but it helps define whole this thing - Danny with a hatchet and a third eye, me with a Chicago Typewriter machine gun… we’re not pushing it into a novelty, it’s more about keeping that vibe alive.”

Considering how the many other bands and projects are also be sitting in the pipeline between all of the combined musicians – the members talking to MR seem cautiously optimistic about how they’ll be moving forward to keep said vibe alive. It will simply be a case of making the most of what time they do manage to find - Danny pointing out each and every project needs its own time to breathe…

“Every time I get in a room with different people, it’s a different conversation,” he admits.

“If I play with Tool, we meet in this other place. Same as when I jam every month with these weird jazz dudes who played with Miles Davis or Mahavishnu Orchestra. I will continually try to get better as an individual, even when it’s different conversations musically. I say different things when I’m with the Seagullmen and different things with Tool: you should get something out of it all one way or another, haha!”

Speaking of Tool – does the drummer have an update on how that long-awaited fifth album is shaping up and when it will be appearing?

“All I can say is it’s still something in progress,” shrugs Carey – before the line goes ominously quiet. There’s a distant murmur in the background. “Definitely this year,” he laughs, before thanking us for the call and explaining he needs to rush off. The drummer is remaining as tight-lipped as ever. We can but hope. And in the meantime, a maiden voyage with the Seagullmen beckons…