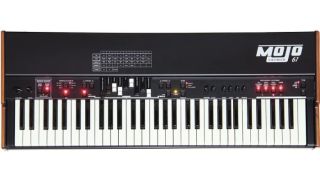 While the 61-note, single-manual Crumar Mojo 61 runs GSI’s VB3-II sound-engine software and sounds identical to the dual-manual Mojo, it adds WiFi control over editing and a pipe organ to its list of additional instruments (electric pianos and transistor organs), but it holds only two presets instead of the eight found in the dual-manual version.

Like most single-manual, Hammond-style clonewheels, the Mojo 61 can be used in dual-manual mode when connected to a second, lower-manual keyboard via MIDI. Each manual gets a single set of drawbars with two presets.

To put this in perspective, the more expensive, single-manual Hammond XK3c has two sets of drawbars and 8 presets controlled by the lower octave of reverse-coloured keys, as on the original Hammond B3, C3, and A100 models. The bigger Hammond XK-5, also a single-manual instrument, has four sets of drawbars—two for the upper and two for the lower manual, as well as the octave of reversed colour preset-keys. Personal preferences determine which is best for a player, but I’m happy to shed the extra weight and size that the reversed keys bring. As long as I have a set of drawbars that I can tweak on-the-fly and a few presets, I’m good. The Mojo 61’s set up is similar to what you find in the Nord Electro and Hammond SK1.

One of the first things I noticed about the Mojo 61 is that the keyboard has a shorter throw (the angle from resting state to the bottom of the key bed) than other clonewheels I have played. Consequently, it reacts more like a traditional Hammond, which had the effect of making my playing sound more like I was using an original instrument.

The VB3-II sound engine has become one of the most respected Hammond emulations available, and its built-in Leslie simulator has a level of B3-ness that is not apparent in other clonewheels. There’s more “girth” to the sound, and it especially jumped out when I added percussion. The Leslie emulation includes drive, Fast/Slow/ Stop control, and the typical chorus/vibrato effects. The master volume and drive knobs are shaped like level controls on a vintage Leslie, which is a nice touch.

When I bypassed the internal Leslie sim and ran the Mojo 61 through an original Ventilator Leslie sim, as well as a Speakeasy Vintage pre into a Leslie 45, each of these setups sounded even more realistic. But what it all comes down to is a combination of nuances that, when taken together, produce what is a damn-near real B3 experience on the Mojo 61: It’s the tone combined with keyclick, as well as details such as leakage, crosstalk, and resistor-wire age, that give this engine its own mojo and realism, while stripping away the sterility that some digital B3 emulators provide. And, as you will see below, all of this is tweakable so you can dial in your personalized variations in character.

However, the Mojo 61 is more than just a Hammond Wanna-B(3). You also have access to two transistor-style organs—Combo F offers a Farfisa sound, Combo V has the Vox character—while Pipe emulates a 776-pipe Baroque-style organ. Each of these organs gives you plenty of nuance and detail.

The Mojo 61’s electric pianos include Tines, a Rhodes emulation, and Reed, which is based on the Wurlitzer sound. As you would expect, the pianos include instrument-specific effects such as tremolo, auto-pan, ring modulation, stereo phase and chorus, reverb and an amp simulator. For the latter, Crumar provides models of the Vox AC30, Marshall JCM-800, Fender Twin, and Roland Jazz Chorus amplifiers, each with their own adjustable 3-band EQ. It would be nice if you could access tremolo speed for the electric pianos from the front panel, as well as overdrive the amp simulations to add a little crunch. And I wish I could run all of these through the internal Leslie emulator.

Overall, the Rhodes and Wurlie are very good emulations, and in combination with the effects are especially usable. Of the two, the Rhodes is my favourite, providing a good bit of complexity and lots of tone variation when using WiFi to edit parameters (see below). The Wurlie isn’t bad; it’s just not as dynamic, in my opinion, as some dedicated romplers. Both transistor organs do a fantastic job re-creating the sound you’re looking for when covering Animals and Doors tunes.

Aside from the front panel controls, the Mojo 61 uses WiFi to provide the user with deeper parameter control. As a result, there is no need to navigate levels of menus to alter settings and customize the instrument.

Pairing the Mojo 61 to an iPhone is a breeze: Under settings, select MOJO as if it was a network, enter a pass code, type Mojo/ into the browser, and you are in. Now, all of the features under the hood are revealed, and every parameter is easily accessible with an additional push of a button.

The result of this connectivity is that making changes to a patch is simplified, which is exactly what you want in stressful situations such as on the bandstand or in the studio. For example, at home before a club gig with the funk/soul band Family Style, I went through every parameter and got what I thought would be the organ sound I would need. But as it typically happens, I got to the gig and the organ I chose beforehand in the generator selector (a 1970 A100) wasn’t exactly right for the setup. I needed something a little more mellow in the high register. So between songs, I got out my phone, opened my browser and seamlessly switched to the default VB3CE2 (Standard) organ; then, I hit Save All—easy, fast and intuitive.

In the editor, every parameter is at your fingertips and no more than one menu selection away. Here, you can choose between 21 different Hammond models ranging from late ’50s though early ’70s vintage—B3s, C3s, A100’s, as well as an A101, A102 and A105. There is a selectable generator shape (essentially EQ curves applied to the tone wheels) and variable amounts of leakage and crosstalk with crosstalk shape. You can also adjust for the age of the resistor wires (which makes the organ sound old or new), program tonewheel complexity, and turn Foldback on or off. Plus there is a trimming control available for each drawbar, and a deep assortment of percussion, chorus/vibrato and Leslie parameters—all available through the wireless connection. (It would be nice if all these parameters were listed on the Crumar website.)

Note that the parameters for the transistor organs are not adjustable via WiFi. Everything you need for them is accessible on the front panel.

With the Mojo 61, Crumar has done an outstanding job emulating the feel, sound and general vibe of a traditional tonewheel in a single-manual instrument. With the tone of the organ provided by the VB3-II engine, plenty of editable parameters, and a keyboard that feels so authentic, it’s almost like having a Hammond custom shop in a box.

The WiFi capability is simple and powerful. And the additional instruments are gig-worthy and present a good case for bringing a single keyboard on gigs where you only need these six commonly used sounds. Hats off to Crumar for entering into a crowded market of strong competitors and creating a killer product. I’m off to a show tonight and, yes, the Mojo 61 will be in hand!

Bottom Line
A solid contender for a single-manual clonewheel, with additional instruments for the gigging musician.