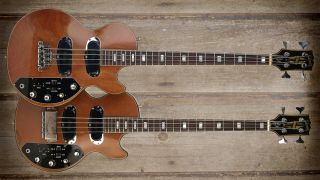 Check out the rare and wonderful Gibson Les Paul Triumph

Following directly on from the Les Paul Professional Bass (Circa 1970-72) the Triumph was introduced as the bass equivalent of the Les Paul Recording model guitar, with similar low impedance pickups but without being set at an angle.

The body is slightly larger than a standard Les Paul, and features a heavily carved top and body scoop. The extra mass makes this a very heavy instrument indeed and the low impedance feature meant you could use much longer leads on stage.

However it needed a special lead provided by Gibson with a transformer built in at the amp end. Without this you were unable to function correctly hence the inclusion of the Hi/Lo Output switch so a standard lead could be used. In spite of this slight complication the fact that the Triumph was so much more versatile sound-wise than other Gibson basses of the time made it a worthwhile venture.

The earliest versions had the typical all-metal three-bolt adjustable bridge/tailpiece, but a slimmer unit with nylon saddles superseded this. In spite of its sound potential, it proved too complicated for most players so was never a real commercial success.

Gibson's Les Paul Triumph bass is a pretty rare and exotic animal and well worth tracking down if you're feeling like exploring the bass jungle.