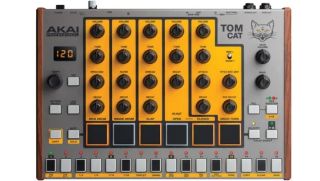 Released in 2014, the Akai Rhythm Wolf caused quite a stir in the synth community. Some users absolutely hated it, while others immediately gravitated to its aggressive and quirky sound. Akai’s newest analogue groovebox, the Tom Cat, will undoubtedly create similar controversy, as its sound and features are just as unusual while covering different percussion territory.

The unusual sounds and solid build of the Akai Tom Cat set this groovebox apart from the pack. The Tom Cat can interface with other instruments in a number of useful ways—via USB and standard MIDI I/O or with the 3.5mm Gate/Trigger I/O.

As with Akai’s other analogue products, the Tom Cat’s construction really inspires confidence, all-metal housing complete with retro wood endcaps. The velocity-sensitive pads are cribbed from the MPC series, with a rubberized finish and internal LED lighting when active. The knobs have a nice, sturdy feel, too, with smooth travel and almost zero circuit-board wiggle. The back panel includes Gate/Trigger I/O (on minijacks), USB MIDI, two DIN MIDI ports for In and Out/Thru, a headphone output, a mono main output for the drum mix, and a jack for the included AC adapter (see Figure 1).

While the overall design is nearly identical to the Rhythm Wolf, the Tom Cat’s drum sounds are quite different, each with its own set of parameters. Let’s take a closer look at them.

The tuning knob governs the overall pitch, the pitch envelope controls both envelope depth and decay simultaneously, and the decay knob handles the amp envelope’s decay. In use, these parameters offer an extremely wide range of textures, from subby trap 808 booms to doubling as a second disco tom, with velocity also affecting pitch. Compared to the Rhythm Wolf, it is a lot punchier too, which makes it well suited to certain dance genres.

Snare. The snare’s synth is equally distinctive, with an integrated highpass filter that allows it to serve as a top percussion element at its highest settings. This is an unusual design decision, but it definitely gives the Tom Cat more range than other analogue drum machines. A decay knob delivers very long release times, allowing the snare to work as a simple noise cymbal in a pinch.

It is worth mentioning here that the velocity has a huge impact on the snare’s overall character, which isn’t obvious when working in step-sequencing mode. If you smack the pad, the snare responds with a satisfying crack. Good stuff.

Clap. The Tom Cat’s clap is reminiscent of the 808/909 sound, with a bit more aggression, as it is based on a bandpass-filtered noise burst. You can customize the results using its tune, spread, and decay parameters, with the tune knob adjusting the frequency of the bandpass filter for more sonic range. Like the snare, the clap’s decay knob extends the release time greatly.

Unlike Roland claps, the Tom Cat’s spread knob allows you to customize a rapid-fire series of claps at the beginning of each sound. Lower amounts give it more snap, while extreme amounts give it a rattle-like sound. In combination with the filter tuning, this delivers a lot of sonic flexibility and frankly, I really like the overall flavour.

Hi-Hat. The hi-hats are nearly identical to those of the Rhythm Wolf, including its idiosyncrasies. That is, the tuning knob’s effect is nearly imperceptible. Sweeping it changes the character very slightly, but frankly, you have to listen quite closely to hear anything. To be candid, I would have preferred that Akai implement the same type of highpass filter as that of the snare, which would greatly increase its usefulness.

What’s more, the decay knob controls both the open and closed hats almost equally. This is extremely odd for a disco-oriented drum machine, as one of the hallmarks of the disco sound is an open hat on the off beats. That’s simply not possible with the Tom Cat (or the Rhythm Wolf, to be perfectly clear). For patterns with mostly closed hats, you can use the open hat as an accent or variation, but for traditional hi-hat patterns, it’s just not gonna happen.

Disco Toms. While the hats may not be everyone’s cup of tea, the Tom Cat’s disco toms are where the unit truly shines. With parameters for tuning, pitch envelope amount, pitch envelope decay, attack (which adds a bit more of a click transient), and amplifier decay, you can quickly nail that familiar ’70s “pew-pew” tom sound that defined classic songs such as Anita Ward’s “Ring My Bell.” The pitch envelope can also be inverted for “woop” effects. Best of all, the velocity is tied to the pitch envelope amount, with harder hits raising the tom’s pitch in very musical ways.

Because of their wide tuning range, these disco toms can also be used as an alternative to the kick, delivering powerful hip-hop booms with the parameters tweaked properly. All in all, they’re quite impressive and fit the name of Akai’s instrument perfectly.

The mixed-drum output also includes the Maul knob, which is essentially a fuzztone distortion similar to the Rhythm Wolf ’s Howl control, but with a gain compensation circuit that keeps the signal level from becoming overwhelmingly loud. Kudos to Akai for correcting this oversight on the Tom Cat, as it allows the drum machine to cover industrial and hardstyle genres quite nicely. Granted, at maximum values the effect still adds a fair amount of noise to the output, but so would adding most distortion pedals, so this is a minor issue in the big picture.

The Tom Cat’s sequencer is a straightforward affair that can be programmed in traditional step fashion or real-time recording with integrated quantization. Step values include quarter, eighth, sixteenth, thirty-second, triplets, and swing sixteenths, which covers most standard groovebox applications.

There are 16 pattern slots, with A and B versions available, for a total of 32 one-bar patterns. To some, this may seem small, but considering that the Roland AIRA TR-8 and Korg Volcas are similarly equipped, it’s certainly not a deal-breaker.

In addition to the sequencing features, the Tom Cat’s pads can serve double-duty as mute and solo buttons. In conjunction with the ability to change the sequence length on the fly via the Last Step button, there’s a decent amount of performance functionality here.

Recording sequences is a breeze, and after a few days of use, I found I preferred recording patterns in real-time, thanks to each drum’s velocity characteristics. While it would have been nice to have the ability to automate the drums’ parameters too, the Roland AIRA TR-8 doesn’t offer this either (though the Korg Volcas do).

Pick of the litter

Like the Rhythm Wolf, the Tom Cat has an unusual, aggressive sound with a great deal of customization range for each percussion instrument. Although the hi-hats have a few obvious design oversights, the rest of the instruments are punchy and present. Taken as a whole, the Tom Cat has a unique flavour that you won’t find elsewhere and is especially well-suited to in-your-face genres like hardstyle and hip-hop. In my production work, that’s precisely what I look for in an instrument: Individuality. My Mattel Synsonics and Boss DR-110 also fit this bill, with decidedly unusual flavours that have made them quite collectable for vintage connoisseurs.

While I’m not sure that I’d recommend the Tom Cat as the only drum machine for mainstream dance producers, I think it is a terrific product for artists who already have a collection of gear and want to add some exotic flair to their arsenal. The Akai Tom Cat provides sturdy construction, and distinctive analogue sounds for a two-hundred-dollar price tag, making it hard to ignore.