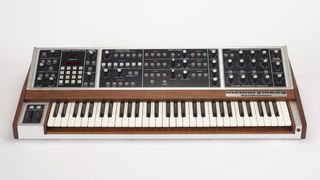 The Bob Moog Foundation’s annual raffle has become a familiar event on the music technology calendar, and this year’s is the most eye-catching yet. That’s because, for the first time, more than one prize is up for grabs; in fact, there are three fully-restored vintage Moog synthesizers in the pot.

All three synths are from the early ‘80s, with the first prize being a Memorymoog that’s estimated to be worth around $7,500. This six-voice polysynth offers three voltage-controlled oscillators, and each voice has its own 24dB voltage-controlled filter. In fact, as far as its architecture goes, it’s been referred to as six Minimoogs in one. What’s more, this particular synth has been retrofitted with a sequencer and MIDI capabilities.

Second prize is a Moog Source, a two-oscillator synth that also comes with that classic 24dB Moog filter. Used by all manner of synth luminaries, it offers patch memory storage and comes with distinctive flat-panel membrane buttons. This one’s valued at $2,400.

Finally, the third prize winner will take home a Moog Rogue, a compact two-oscillator monosynth that specialises in bass sounds. You’d expect to pay $2,000 for it on the open market.

The raffle is running until 24 September or when all 5,500 tickets sell out. You can purchase one for $25 or get five for $100. Funds raised from the raffle will be spent on the foundation’s Dr. Bob’s SoundSchool, and will also go towards the Moogseum, an interactive facility that’s expected to open in Asheville, NC in 2019. It’s hoped that an online Moogseum will follow later in the year.

Tickets are available now on the Bob Moog Foundation website.