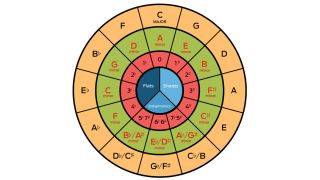 Best of 2019: The circle of fifths is a diagram that lays out every musical note, key, three-note chord and scale, and charts the relationship between them.

A bit like a musical version of the periodic table, the letters can either represent notes, chords or keys. Go around the circle clockwise and each note or key is separated by an interval of a perfect 5th; go round anti-clockwise and they’re ordered in 4ths.

But what does the circle of fifths actually do for us? Let’s find out...

Major keys are found on the outer (yellow) ring, with their relative minor keys shown in the same segment on the inner (blue) ring.

10 things that every music producer needs to know about chords

It tells us how many sharps or flats are in each key, as seen on the central (blue) ring. As you go clockwise from the top, each key adds one more sharp until you get to seven sharps (C# major).

Going anti-clockwise from the top tells us the number of flats, adding a flat each time until you end up at seven flats (Cb major).

When working with borrowed chords, the circle can show you the diatonic chords for the parallel key to the one you’re currently in. Choose your tonic note, then locate its parallel key by finding the same note on the other ring. Now just select a chord to borrow from the palette of five chords that immediately surround it on the circle.

The circle tells us the most similar keys. Similar keys are keys whose parent scales differ only by one note - eg, C major (C D E F G A B) and G major (G A B C D E F ) contain almost all the same notes except for the F, which is F# in G major and F natural in C major. Pick a key on the circle, and either adjacent key will only be one note different. Because of this similarity, a lot of music tends to change key by moving between adjacent keys on the circle.

It also tells us the least similar keys. Spaced 180 degrees across from each other, you’ll find the keys with the fewest notes in common - that is, just two notes. So, the key of C major (C D E F G A B) and its opposite number F# major (F# G# A# B C# D# F) share only the notes F and B.

The interval between two directly opposite notes on the circle is always a tritone (six semitones) - handy when figuring out tritone substitutions.

There are several mnemonics (memory aids) you can use to help you remember the order of keys on the circle. For the sharp side (clockwise), there’s Charlie Gets Drunk And Eats Beetroot, while for the flat side (anti-clockwise), you could go for Charlie Forgets BEADs.

You can also use mnemonics to remember the order in which sharps and flats are added to a key signature to indicate each successive key. These include Father Charles Goes Down And Ends Battle for the sharps and Battle Ends And Down Goes Charles’ Father for the flats.

What are modes in music, and how do they work?

When we get to the lower section of the circle, things get interesting key-wise. The keys with five, six and seven sharps (B, F#, C#) continue clockwise around the circle, overlapping with those that have five, six and seven flats (Db, Gb and B) as they continue from the anti-clockwise direction. So, for instance, F# major with its six sharps and Gb major with its six flats are the same key with two different names.

The same goes for their relative minor cousins, D# minor and Eb minor. Known as ‘enharmonic’ keys, these keys have dual identities according to whether you’re dealing with sharps or flats.

Pick any chord on the circle to be the I chord (or tonic), then the chord to the left will always be the IV chord, and the one to the right will always be the V chord. Known as primary chords, these are the basis for literally thousands of songs, particularly when used in what’s known as the I - IV - V progression.

The ii - V - I progression is one of the most widely-used musical phrases there is, especially popular as a jazz turnaround, used to return to the tonic.

To find the minor ii chord in any key, just count two notes over clockwise from the tonic and ‘minorise’ that chord. From there, step anti-clockwise back two steps to hit the V and I chords. For example, a ii - V - I in the key of D would be Em - A - D.

The circle can help with easy key changes that use the dominant 7th of the new key as a method of modulation, placing the dominant 7th before the change to the new tonic chord to prepare the listener.

For example, to change key from G major to A major, find the new key’s root (A) on the circle, and the next note over clockwise will be its dominant - E, in this case.