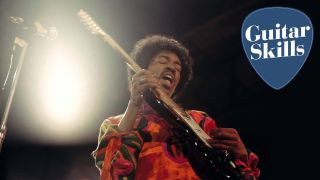 We've already looked at Hendrix's rhythm technique in our previous lesson, now we're moving on to his other remarkable strengths as a trailblazing rock interpreter of the blues.

We're going to focus on Jimi's lead techniques individually as there's a wealth of ground to cover here – and it's all great to learn!

Get your fingers around the most expressive of lead techniques with three of Jimi's favourite approaches.

Check out the solos in All Along The Watchtower and you’ll hear Jimi’s unison’ bends (two notes of the same pitch played at the same time – one with a string bend and one with a fretted note). You can play quickly and precisely, so you don’t hear much of the bend up, or you can draw out the bend creating dissonance on the way. It’s up to you!

Jimi loved this technique and used it in so many songs, perhaps most notably Foxey Lady. As you reach the peak of the bend touch the string with your pick to mute the note and create the staccato effect. Follow up on the next note with rapid BB King-style vibrato, rotating your wrist rather than moving just your fretting finger.

This tricky technique is a Jimi trademark made up of two string bends: a standard bend followed by a pre-bend on an adjacent string, which is then released.

Simply roll your second finger across from the second string to ‘catch’ the third. The course of the first bend should automatically push the third string into a bend.

Some of Jimi's most extreme sounds came from mixing different techniques together – to great effect!

Simply depress your whammy bar while performing a trill with hammer-ons and pull-offs at the 12th and 15th frets on the second string to achieve this interesting ambulance siren-style doppler effect. For more extreme sounds, try it on the third string, which has lower tension.

Jimi was so ahead of the times with his legato technique. His style spawned the fluid technique of many players including Richie Blackmore and joe Satriani (and many modern shredders too) with this very idea.

Jimi’s psychedelic and Indian influences can be heard in ideas such as this. The low E is used as a constant drone in the background while the octaves spell out notes from the E Dorian scale (E F# G a B C# D).

This example combines Foxey Lady-style chord playing with more technical fast pentatonic ideas in 14th position. Use all the available pull-offs to aid the speed of the final lick. you may wish to bend up and down in one motion in the final bar.

This is one of jimi’s more extreme techniques and follows on from the pentatonic trill idea. It works particularly well on the fourth and third strings, but you should experiment all over the fretboard.

Simply trill with hammer-ons and pull-offs between the 12th fret and the open note on your chosen string as you dip the whammy bar.

Unlike EVH’s single-note divebombs with Van Halen, Jimi tended to favour using several strings for a more wild and out of tune sound that’s not far off a demented car engine.

Slide your hand up the fretboard then apply a divebomb in one continuous, fluid motion.

5. Playing by feel: in and out of time

Speed up or slow down – it’s up to you as you play this free time lick by feel. There’s no real rule here – it’s all about the ‘feel’.

Simply speed up and slow down this repeating phrase as you see fit. Eventually you’ll hit some rhythms that align with the rhythm of the backing music. It’s a trick jimi would often use in his improvised solos.

The wah movement here keeps time on the quarter-note pulse, as if you were tapping your foot in time. The trick is to develop independence in your foot, so it doesn’t follow the other rhythms you play with your hands.

The faster eighth note wah rhythm can be done on anything but tends to work best on single notes. This way you’ll really hear the classic ‘crying baby’ effect that helped so-name the original Dunlop pedal. The faster wah action makes this much easier to play when standing up.

This vocal-like effect is great on cleaner sounds, where you can follow individual targeted notes rather than just moving in a constant rhythm. This is much more difficult and harder on the foot and ankle, so you might like to try this at a slower tempo initially.