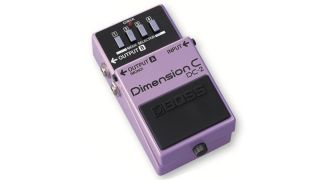 Where most chorus effect pedals were in-your-face, the DC-2 was a versatile and subtle box of magic tricks that brought something radically different to the table.

Originally produced between 1985 and 1989, the BOSS Dimension Chorus was set apart from other chorus effects by virtue of the rather unique way in which it achieves its sound. It uses two modulated delay lines, running out of phase with one another. The depth and rate are internally set, and tied to the mode controls.

There’s also internal feedback and cross feedback, which deepens the effect further, giving it the ‘three-dimensional’ sound it’s famous for. It almost sounds like there are more modulation processes at work, and the out-of-phase combination of the two lines means it’s dramatically different in timbre from more ‘standard’ chorus pedals. The control scheme - simply four buttons on the front plate - is borrowed from its rack ancestor, the SDD-320.

While the effect sounds good in mono, in stereo it sounds dramatically wider, on account of its two discrete delay lines. This was one of the primary uses of the SDD-320 in the studio, widening out guitar tones and fleshing out backing parts. Particularly in the more gentle mode 1, you can get away with having the effect on for a lot of the time before it becomes overbearing, doubly so if it’s being used on a rhythm or pad part.

Interestingly, and somewhat uniquely, the Dimension-C is all analogue for both delay lines, using a decadent double BBD setup. Because of the tech which was available at the time, the LFOs and the circuitry that acts as the ‘brains’ of the unit are also all analogue. For the more recent DC-2W reissue, however, these parts were replaced with digital control circuitry.

The front of the Dimension Chorus couldn’t be simpler - there are four buttons to control which mode is engaged, and that’s it. Although it can be hard to tell, the numbers represent the intensity of the effect, with 1 being the least dramatic, and 4 being the most extreme. Mode 4 has a greater depth than mode 1, that’s for sure, but although the rate is slightly different between the patches, again, it’s not a dramatic difference unless you jump straight from 1 to 4, or vice versa.

With the Dimension-C proving enduringly popular and increasingly sought after on the secondhand market, Behringer thought they were on to a surefire winner with the Space-C. Like the DC-2, the Space-C uses BBD chips, though due to using a different voltage regulator, the pedal has reduced headroom compared to the DC-2 - an unfortunate situation given the DC-2 was already prone to distortion. This is now discontinued.

Like the DC-2 , Boss’s DC-3 Digital Dimension was a stereo chorus unit, but that’s about where the similarities between the two end. Unlike the simple UI of the DC-2, the DC-3 had regular rotating pots for its controls, and was of course digital, rather than analogue. Without the warmth of the analogue circuitry, the effect is drastically sharper and more glassy than the DC-2, although it is maybe a little less noisy.

The DC-2 was originally based on the Roland SDD-320 Dimension D rack processor, a studio unit that now fetches breathtaking prices online. With the Waza Craft DC-2w, some of the DC-2’s issues like low headroom and noise are alleviated to some extent, while a pretty decent replication of the SDD-320 is also packed into the pedal. Like the original, the DC-2w is best enjoyed in stereo.

Get the tone #1: the spirit of Rush

Set the pedal to mode 1, then bash out some extended major chords with a distortion in front. Let the stereo feeds ring out, and if you happen to have a real amp in the room, you might even want to try for some sympathetic feedback.

Get the tone #2: grunge finger-picking

Set the pedal to either mode 2 or 3, and then pick out the notes from some power chords on the bottom strings. Aim for a balance of busy and sparse picking, and the pedal will keep a bed of swirling chorus to draw the listener in.

Get the tone #3: Steven Wilson chords

In mode 4, play some extended minor chords, preferably up above the fifth fret on the higher strings. A more rhythmic pattern with staccato stops will bring out the effect more strongly, whereas arpeggiating chords will sound closer to Wilson’s preferred effect of vibrato.