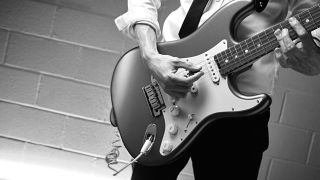 The Motown and Stax record labels are synonymous with soul and R&B music during the 1960s. The stylistic traits of their musical output have permeated everything from pop and country to blues and rock, and it is often the go-to sound if you want a particular ‘retro’ soul or funk vibe.

Improve your improvs in 20 minutes

Embellishments such as diads and chord extensions - along with smaller partial chords - are perhaps what the guitar style of these two infl uential labels are best known for. Players such as Robert White, Joe Messina and Eddie Willis (from the Motown house band the Funk Brothers) perhaps represent the Motown label best, whilst Steve Cropper from Booker T & the MG’s is mostly strongly associated with the Stax label.

This month’s riffs and licks will help give you a flavour of the Motown/Stax guitar sound, but will also help you improve your understanding of ‘triad’ (three-note) chords, musical embellishments and interweaving ‘counterpoint’ guitar lines.

The use of 6th and 3rd intervals moved up and down the neck is at the heart of Steve Cropper’s playing. The best way to jam with these is to see how each lick relates to the simple chord shape underneath. For example, in bar 1 the notes A and C# are the root and 3rd from the A chord.

The beauty of using 4th intervals (such as the two-note shapes at the end of bar 2) is that they sound quite neutral and are great over a variety of chords. The harmony is a bit more ‘jazzy’ here, but with a few simple moves these 4th intervals will help you strike a more musical balance between chords and melody.

This is a variation on a Stax favourite chord rhythm/progression that was used many times on big hits in the 60s. A great lesson here is to recognise the relationship between the B b6 and Gm chords we’ve used: both shapes use G, B b and D notes, albeit in a different order - so you can in theory use the chords interchangeably.

We’ve provided a typical counterpoint rhythm to the previous riff here. The key is to keep a constant 16th-note picking motion going, even during the rests. Creating a great single-note rhythm that sits alongside strummed chords is often about filling in the cracks, rather than being tempted to play exactly the same rhythm.

Once you’ve tried the tab exercises and also had a go at creatively adapting them in different areas of the fretboard, you’ll develop a feel for how many strings to play, which shapes to use and which hand position for whatever you happen to be playing. Experiment by trying one or two of these different rhythm methods in your next jam. It could be as simple as adding a few small embellishments to a basic chord progression to make it sound more interesting, or trying an improvised single-note line instead of playing chords.