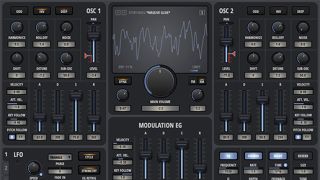 Based on the ‘multi sine oscillator’ synthesis technology originally developed by Professor Dr Udo Zoelzer of Hamburg’s Helmut Schmidt University, the first ever softsynth from MIDI controller builder Nektar Technology is something of a… well, bolt from the blue!

You see, what makes Bolt genuinely different to anything else that’s currently out there is the architecture of its two oscillators, which use a technique the developers have described as “harmonics synthesis”.

Easy to use, creatively rewarding and perfectly affordable, Bolt is this year’s first surprise softsynth hit.

Read on for a step-by-step intro to this novel new synth.

Step 1: Bolt’s big draw is its innovative oscillator design, which uses “harmonics synthesis”, removing the need for a filter. Click the preset name at the top and select Default to initialise the synth. The default patch has both oscillators active and identical, creating a simple tone, the waveform of which is visible in the Oscilloscope display.

Step 2: Clicking the Oscilloscope switches it to the Spectrum view, showing the harmonics that make up the waveform. Bolt isn’t an additive synth, and you can’t manipulate these harmonics directly within the display. Rather, the two oscillators are manipulated and combined using just a handful of controls to form complex and characterful waves.

Step 3: The Harmonics knob on each oscillator reveals more upper harmonics the further clockwise it’s turned, while the Rolloff knob determines the angle of the slope at which the volume of the harmonics above the ‘cutoff’ point drops off. Cranking both of them up to around 2 o’clock for Oscillator 1 adds a lot of higher frequencies.

Step 4: Clicking Odd makes the Osc output odd harmonics only, and activating it for both oscs gives a hollow, square/triangle tone. Deep softens the wave and applies a low-end boost – ideal for bass. Invert inverts the phase of its oscillator, for phase cancellation effects when both oscs are set up the same.

Step 5: Osc 1 offers two modulation options, via the FM and XM buttons (only one can be active at a time). FM applies frequency modulation using a sine wave LFO, while XM uses Osc 2 as a frequency modulation source for Osc 1. We’ve lowered the Sustain of Osc 2’s envelope and activated XM for a punchy attack.

Step 6: The triangle control on each Osc Level slider overdrives the signal to analogue-style distortion, and the Sub-Osc knob brings a copy of its associated osc pitched an octave lower. Pitch Osc 1 up an octave, raise its Drive and Sub-Osc, shorten both Oscs’ Attack stages and activate Bolt’s Chorus for an angry bass.