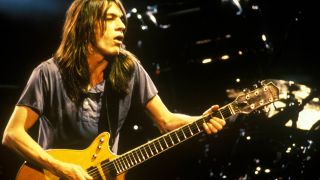 It was a simple recipe, and Malcolm Young used it for nearly four decades. He had a sunburst Strat in the early days (with Angus on an ES-335), but the torch was passed from George Young and co-producer/fellow Easybeats guitarist Henry Vanda in the form of a 1963 Gretsch Jet Firebird that would be Malcolm’s mainstay: ‘The Beast’.

We salute you: the rhythm guitar genius of Malcolm Young

Mal wasn’t precious about modding it; the cherry finish was stripped back to maple around the time of ’77’s Let There Be Rock tour. And with the guitarist leaning solely on the TV Jones bridge pickup, the neck and middle were taken out too. Gretsch’s Custom Shop recreated the guitar with the Malcolm Young Salute model in 2017 – complete with battle marks earned from decades on the road.

His early tone was scratchy and abrasive for a rhythm man. Through a selection of Marshalls – including Super Bass models – that was his sound; heavy gauge strings but lower gain and higher headroom. Bridge pickup brightness complemented with the semi-hollow body and high trebles, low bass alongside mids under halfway.

Blues boogie-style riffing is a recurring theme in AC/DC’s rhythm style – The Jack and Boogie Man are great examples. Fret the E5 chord with your first finger to leave your other fingers free to play the 3rd, 4th and 5th frets.

Few players are as creative with basic open chords as Malcolm Young, and this example shows you some of the kind of ideas he’d use in hits like Highway To Hell and You Shook Me All Night Long.

In this example, notice how several chords are played on offbeats – a neat rhythm trick that Malcolm would use to punctuate his guitar parts in tracks like T.N.T., Problem Child, If You Want Blood… and many more. In most cases Malcolm would use an all downpicking approach.

Arguably AC/DC’s biggest track, Back In Black demonstrates Malcolm’s super-tight timing, particularly on the unusual riff that kicks in at 0:14. Try out our similar example to hone your timing. Malcolm would generally down-pick the riff but we’ve included down- and up-strokes to help you ‘feel’ the rhythm.