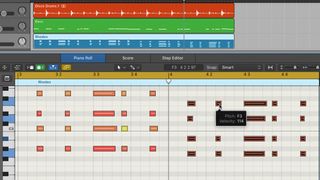 With its metronomic 4/4 beats, synth basslines and electronic percussion, disco evolved throughout the 1970s, eventually becoming the forerunner of house. It was disco that most successfully married the new sonic possibilities of the synthesizer to the traditional sounds of strings and brass, sustaining the use of orchestral instruments in pop until synths finally took over completely in the new wave explosion of the early ‘80s.

Two of the greatest exponents of this technique were Nile Rodgers and Bernard Edwards, the production masterminds behind Chic, Sister Sledge and many other disco classics. Making prominent use of soulful major and minor seventh chords, they hit on the perfect blend of slick 4/4

grooves, funky, extended minor guitar chords (such as Bbm11 or Abm9), clever basslines and great pop string arrangements that ultimately came to epitomise the sound of the disco era.

Let’s explore how major and minor sevenths can help you to create that classic disco sound.

Step 1: The minor seventh chord is disco’s best friend, as we’ll demonstrate in this mini-sketch, which contains a suitably disco-licious rhythm track of drums and bass. We’re going to add some Rhodes electric piano chords, starting with Cm7. To make this chord, start by creating a regular C minor chord, inserting the notes C, Eb and G.

Step 2: A minor seventh consists of a minor triad with an added flattened seventh degree. This means that we take the seventh note in the major scale, lower it by one semitone and add it to the chord. The seventh degree of the C major scale is B, so we flatten this to Bb - three semitones up from G - and tag it onto our existing C minor chord to get C, Eb, G and Bb - Cm7!

Step 4: Let’s conclude with a Gm7 in bar 4. The minor seventh formula is 1, b3, 5, b7, so with G as our root note this time, we get G, Bb, D, F – Gm7. So far, we’ve merely been blocking out the chords, placing them on the downbeat, but to make things a little more disco, we could use a pattern like the one shown here to fit with the rhythm of the drums and bass parts.