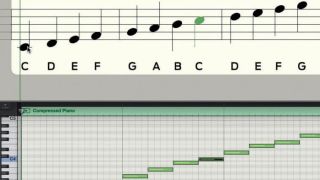 Altered chords are chords that have been changed by having the pitch of one or more notes in the chord sharpened or flattened by a semitone. Altering a chord in this way can have a big effect on its character and tonal colour, so substituting regular chords with altered versions in a progression can spice things up without straying too far beyond the boundaries of functional harmony.

One use may be to increase the tension when resolving from a V7 chord (a dominant 7th chord based on the fifth degree of the scale of the current key) back to an I chord (the tonic chord of the current key) by altering the V7 chord to, say, a V7b5. This would make for a more spectacular payoff when the resolution finally happens.

Borrowed chords, also known as modal mixtures or substituted chords, are chords that are borrowed from a parallel major or minor key. Typically, these are used as 'colour chords' providing a brief harmonic variation. Borrowed chords can also be thought of as one of the simplest forms of altered chord and can be considered transitory modulations.

Here, we're going to focus on the ‘shifting the pitch of a note by a semitone’ kind of alteration. The most effective of these kind of alterations are based on dominant seventh, minor seventh, dominant ninth and minor ninth chords, so over the following couple of pages, we’ll be looking at building these types of altered chords for use in your own productions.

1. Here’s the C major scale – all the white notes on the piano keyboard, played from C to C, giving us C, D, E, F, G, A, B and C once again, an octave higher than the root note. This time we’re going higher than the octave, extending the range of notes available to two octaves, so that we can build some extended chords.

2. Number each note, or ‘degree’ of the scale from 1 to 15, giving us a way of naming chords that can be built from these notes. Build a dominant C7 chord by playing a C major triad consisting of 1(C), 3(E), 5(G) and adding a flattened 7(Bb). Turn this into a C9 chord by adding the ninth degree of the extended major scale, D.

3. There are certain notes that are common candidates for alteration in a chord like this: the 5th (G in this case) and the 9th (D in this case). Do this by sharpening or flattening one of these notes by one semitone. Let’s forget the 9th for a minute, and look at a dominant C7 chord. Check out the 5th of the chord, the note G.

4. If we move this note down in pitch by a semitone, we’re flattening it to a Gb. This creates a really tense-sounding C7b5 chord (C-E-Gb- Bb). This tension is due to the dissonance of the Gb, which doesn’t belong in the parent C major scale, begging to resolve back to the G a semitone above it.

5. On the other hand, if you raise the 5th of a dominant 7th chord, altering G to G# in the case of C7, you get what’s known as a C7#5, or a Caug7. This is because the raised 5th creates an interval of an augmented fifth between it and the root note.

8. So when do we use these altered chords? Alterations work just as well on minor and major sevenths as they do on dominant chords. So let’s look at a simple progression that alternates from im7 to III7 and back again.

9. Here we’re in the key of C minor. The III7 chord in this key, Eb7 (because Eb is the third degree of the C minor scale), is already pulling back to the im7 chord (Cm7) but we can increase the tension by altering the III7 chord to a III7b5 chord to produce an Eb7b5. This is done by flattening the 5th, Bb, by one semitone, down to A natural.

10. Altered chords also work well in non-diatonic progressions. In this F minor track, the progression in bars 1-8 is Fm7 (F-Ab-C-Eb), Abm7 (Ab-B-Eb-Gb). The Abm7 is non-diatonic, it doesn’t belong to the key of F minor. In bars 9-17, I’ve altered it by flattening the 5th (Eb) to a D, producing an Abm7b5 chord (Ab-B-D-Gb). That D adds a dramatic and foreboding flavour.

11. Another really useful example of an altered chord is the augmented V (#5) chord with a sharpened 9th. (Vaug7#9). One of my personal favourites, this one is full of tension and drama, great for resolving back to a im7 chord. Let’s start with a standard dominant 9th, we’ll use the V of Cm, G, as our root, giving us G-B-D-F-A.