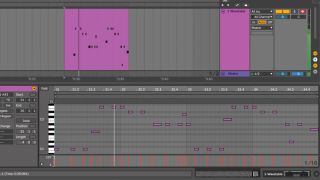 Simple in its implementation and execution, but nothing less than a creative life-saver, Live 10’s new Capture function enables you to instantly recall every MIDI note recently played at the click of a button, even when the transport is in stop mode.

Yes, that's as reassuring a feature as it sounds, so let's see how it works. Get more Live 10 tutorials in the February 2018 edition of Computer Music.

Step 1: We’ve all played inspiring chord progressions, drum patterns or riff ideas in via MIDI, only to lose that initial idea when it’s time to record. Well, Live 10 users can now bring those ideas back from the dead with the new Capture feature. We begin by jamming a few rough ideas on our MIDI keyboard, until something cool catches our ear…

Step 2: Oh no… we forgot to hit the record button! But not to worry - behind the scenes, Live 10 listens to the input from all currently armed MIDI tracks. When we punch the Capture button (the square ‘crosshairs’ button) up in the top transport bar, the notes we just played magically appear in a MIDI clip on the timeline.

Step 3: We can now head into the MIDI clip to quantise notes and expand upon our initial idea. Capture isn’t a new concept in the DAW world - FL Studio has had the less excitingly named ‘Tools > Dump score log to selected pattern menu’ command for many years now - but it’s good to see this potentially lifesaving feature as a part of Live.