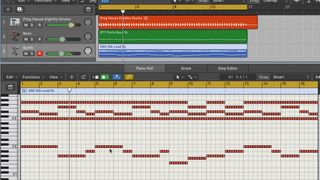 Rigid, pumping eighth-note chords can be found in most genres, but are particularly effective in progressive house.

Let’s head into our piano roll and work out how to create them...

Step 2: Make sure all the notes are the same velocity, then copy and paste to end up with a chord on every eighth-note beat, as shown. Adjust the Release of the synth’s amplitude envelope and the filter Cutoff, so that you hear a pulse rather than a constant chord against the beat. Then copy the lowest notes and paste them an octave lower for a bassline.

Step 3: Now, experiment by changing the chord slightly, moving the middle note (the third – Eb) down one semitone to D to create a Csus2 chord, or up two semitones to F to create a Csus4 chord. You can also move the bass note around the C minor scale while doing this, to make a more interesting progression overall, like the one shown above.