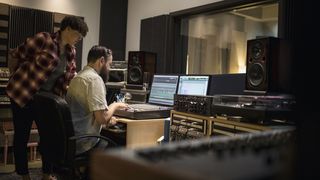 The breakneck speed of drum ’n’ bass and jungle demand a very particular style of drum programming, but within that core framework, there's plenty of room for creative manoeuvre.

Let's take a look at six established DnB MIDI drum patterns and explore the differences between them. You can learn more electronic drum programming techniques in the June edition of Future Music.

Step 1: In comparison to many drum-machine-driven electronic styles, '90s jungle is synonymous with sliced and resequenced breakbeats sampled from funk records. Quite often, one or more breakbeats can be sequenced in tandem to create polyrhythmic effects.

Step 2: Jungle’s evolution into drum ’n’ bass saw tempos rise to around 170bpm, and those breakbeat polyrhythms reduced to the essence of DnB: the two-step beat, whereby the second kick in a bar is pushed later in time to the eighth-note before the second snare, giving the groove a signature ‘stepping’ quality.

Step 3: The two-step beat is the quintessential DnB drum pattern, but other variations of this are also commonplace. Instead of having the snare firing on beats 2 and 4 of the bar, that second snare is often displaced either back or forward by an eighth-note.

Step 4: ‘Half-time’ drum ’n’ bass uses the same framework as in step 2, but instead of the snare landing on the second and fourth beats of the bar, a single snare is placed on beat 3. As the name implies, this ‘halves’ the perceived speed of the groove.

Step 5: Aggressive, technically-polished DnB styles such as neurofunk utilise intricate sound design to build an alien-like, futuristic aesthetic. One common neuro-DnB drum pattern is almost identical to the two-step, except the second kick in a bar is shifted back to the last 16th-note before beat 3.

Step 6: Finally, some DnB producers are known to reject all of the aforementioned formulas, instead taking inspiration from polyrhythmic jungle programming. Almost anything goes: predictable patterns are switched, flipped and twisted at will to keep the listener guessing.