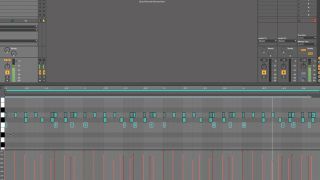 Although there are, of course, no rules when it comes to making music, familiarity with the percussive tropes of the many dance and electronic styles out there is essential for any producer.

In this walkthrough, we'll take a whistle-stop tour of five of the most ubiquitous kick drum patterns around. Listen to them in the playlist at the bottom of the page.

For more advice on programming and processing kick drums, get the April 2019 edition of Computer Music.

Step 1: The kick drums in house and techno couldn’t be simpler: stick one on every beat of the bar and you’re pretty much golden. Want to make things a bit more interesting, though? Try adding an extra hit in between beats 4 and 1 every two or four bars, or quieter lead-in notes before certain beats - or all of them!

Step 2: The fast tempo and sub-heavy sound of drum ’n’ bass demand a cautious but confident approach to the kick drum, and you’ll want to keep it punchy and to-the-point, as shown by this ubiquitous template groove. The addition of just a couple of extra notes makes things sound much more busy, and off-beat syncopation can up the rhythmic interest.

Step 3: The drums in UK garage are all about pace and swing, and the kick drums are often at the more hectic end of the MIDI programming spectrum. They also make good use of dynamics, with a fair bit of variation in level from note to note.

Step 4: The programming of hip-hop drums varies according to sub-genre, but for many, the loping grooves of the late, great J Dilla represent the last word. Dilla was a drummer, and he played many of his beats in live on an Akai MPC 3000. To get a similar off-the-grid feel, play your kicks (and other elements) in on a MIDI pad controller and leave them unquantised.

Step 5: The TR-808-generated kick drums of classic-style trap are notable for the unique way they blur the boundary between kick and bassline. To program your own, get an 808 emulation plugin and either automate the pitch of the kick drum up and down, or - if your source can be set to follow incoming note pitch - trigger it melodically in the piano roll.