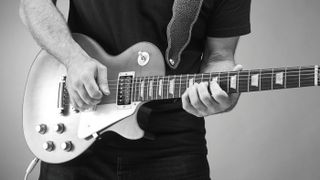 Get this essential technique sorted and play along with our tab and audio...

“Strumming is fairly simple, right? Is there really that much to learn?”

Well, for the uninitiated, let’s explain what strumming is first. When you play the guitar you pluck the strings with a pick and you’ll either strike downwards or upwards. Strumming just means you’ll be using a mixture of downstrokes and upstrokes, striking several strings at once.

Generally, yes! If you’re just starting out on the guitar, practise strumming a chord using steady, regular downstrokes. If you’re playing an open E chord or a G then strum all six strings. If you’re playing a D chord strum only the top four strings (the thinnest, highest pitched ones). There’s a bit of a knack to targeting the right strings, so expect to make gradual progress.

“I’m already used to strumming. How do I take my technique to the next level?”

Once you’ve got the basics down, your next aim is to start to sync your pick strokes with the rhythm of the music. You’re probably doing this already, so let’s make sure you understand how and why it works so you’ll always play in time.

“Okay. How do I start practising?”

Have a go at the exercises in the boxout on the right and see how you get on.

It’s not just about the pick strokes - the idea is that you’ll be synchronising with any music you’re playing over. So, as long as the music has a four count, you’ll be playing a downstroke on the numbered pulse (aka playing on the beat) and your upstrokes will fall in between. It’s not the only way to strum, but it’s used a lot in all styles of guitar music.

“I get it. It’s as much about the music as the strumming itself.”

That’s right! Have a look at our first tab example and you’ll see how the strumming ‘interlocks’ with the music. Even though you don’t strum every down- or upstroke, you can keep your picking motion going so that you stay in time. Just make sure to strike the strings at the right time.

“How do I tackle the second tab example?”

This one is at double speed so you’ll play four pick strokes (down up down up) for every musical pulse. It’s much more energetic, so make sure to practise slowly at first.

Learn the ins and outs of down and up style strumming

Most music has a rhythmic pulse which you can count or clap along with to keep time. The most common pulse is a four count.

2. Strum along to your count

Keep your four-count and downstrokes going then introduce upstrokes (shown with a ≤ symbol) in between for a steady strummed rhythm.

If you’re feeling brave try playing at double speed! That means you’ll be playing 'down up down up' on every number.

Although you only strum three times in bar 1, try to keep your strumming arm moving constantly - it’ll help you stay in time.

Here we’re strumming twice as fast. If you keep a constant strumming motion going you should play 16 strokes in each bar of music.