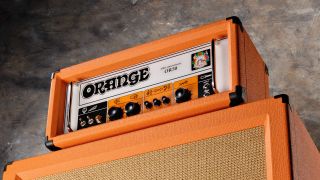 Having redefined the amp sound in the 1960s, the future is still looking Orange...

Back in the late 1960s, a London-based entrepreneur called Cliff Cooper upset the guitar amplification apple cart with a new brand that grew rapidly in popularity. Orange amplifiers had a distinctive look and sound with a smoother, guitar-friendly overdrive, boxy midrange and plenty of clean headroom.

The Orange OR120 is the quintessential Orange head, and can be seen in many archive images behind influential players of the era, including Paul Kossoff , Peter Green and Jimmy Page.

Introduced in 1972, the earliest versions had control panels with symbols and no lettering and became known as ‘Pics only’ heads. The simple control layout included a Frequency Analysing Control (a six-position switch that varies mid content) together with high and low frequency Baxandall tone controls, HF drive (a high treble/presence level control) and volume.

The OR120s incorporated some circuit changes from earlier Orange amps, which pushed the EL34 power valves harder for a warmer, more driven sound in response to player demands, and marked a sonic turning point that many view as the birth of the famous ‘Orange sound’.

There were other components, including the distinctive picture-frame speaker cabinets with basket weave grilles. This material has a subtle filtering effect, smoothing out high frequency content and helping to make the amp less tiring to listen to at high volume. The circuit used a pair of 12AX7s to drive a quartet of EL34s, producing a comfortable 120 watts of power; it’s really in the power stage that the classic Orange tone is produced, which in the less-sensitive 1970s meant turning it up very loud.

The Orange OR120s unique preamp used a Frequency Analysing Control (a six-position rotary switch that varies mid content), together with a Baxandall tone control circuit with knobs for bass and treble.

Combined with the HF drive control, this unusual preamp design is actually very versatile with a lot more flexibility than the traditional interactive bass, mid and treble tone stack found on contemporary Fender and Marshall designs.

Much of the classic Orange sound is a result of the power stage being driven hard by the phase inverter circuit. Four EL34s linked to huge power and output transformers gave the OR120 a true 120-watt power output with massive headroom. Many original OR120s used the Blackburn-manufactured Mullard ‘XF2’ EL34, which is renowned as one of the best power valves ever produced.

Most speaker grill cloths are made to be sonically transparent, however, the thick basket weave fabric used on Orange speaker cabinets works to subtly roll off high frequencies, making it possible to drive the amps harder without harshness. The cabinets used wooden skids instead of rubber feet, which acoustically coupled to stages for even more volume. The punch and impact of an OR120 through its matching PPC4x12 cabinet is unmistakable.

Get the tone #1: Brit blues

Typified by bands such as Peter Green’s Fleetwood Mac, which not only featured Greeny but the extraordinarily talented Danny Kirwan and Jeremy Spencer, Orange was at the heart of the British blues boom of the late 1960s. Check out tracks like Green Manalishi and Oh Well to hear classic Orange tone, often teamed with Orange’s standalone spring reverb unit.

The undisputed king of the riff s was Led Zeppelin’s Jimmy Page. While Page was known to favour using a variety of amps when he was working in the studio, for many of his years on the road, his live rig has usually included at least one Orange head and it’s been the same from the early 1970s, right up to the O2 Arena reunion in 2007.

Get the tone #3: Wall of sound

After a few lean years during the 1980s, Orange returned to centre stage with the arrival of Brit rock and bands like Oasis who favoured Orange amps during the mid 1990s hey day. A wall of overdrive and fat midrange formed the sonic backdrop for some of the biggest hits of this era, including tracks such as Roll With It, Wonderwall and Rock ‘n’ Roll.

How to find the Orange OR120 in your amp or software