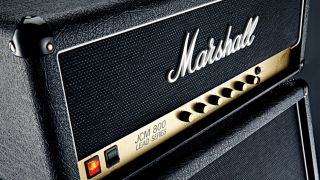 Ask any non-guitarist to describe a guitar amplifier and the chances are they’ll use words like ‘big black boxes’, ‘gold panel’ and ‘white writing’.

Because the amp most people have an image of in their heads is the iconic Marshall JCM800, one of the world’s most popular and widely recorded amplifiers.

The JCM800 entered service in 1981 at the end of Marshall’s infamous distribution deal with Rose-Morris; without the huge mark-up Rose-Morris previously applied, the newly affordable JCM800 rapidly achieved popularity all over the world.

The JCM800 was Marshall’s second range of master-volume-equipped amplifiers - in fact, the very first models, the 2203 and 2204 were repackaged earlier Master Volume circuits, followed swiftly by the channel-switching 2205 and 2210 models.

These were the first to use diode-clipping - mixing valve and transistor gain stages to increase gain and distortion. It didn’t go down well with old-school classic rock players, but guitarists who were part of the new wave of British heavy metal loved the tight, aggressive tone of the newer hybrid amps, as well as other modern features like effects loops and channel switching.

Very quickly, the new breed of Marshall was accepted and became an integral part of heavy metal all over the world.

Later circuits were somewhat more refined (if such a word can ever be applied to a Marshall), attempting to bridge the gap between the new hybrid design and the purer tones of the earlier all-valve models. The aggressive bite of the original JCM800’s has written its own legend, and today rates as one of the all-time great guitar tones.

Together with channel switching, the 2205 introduced Marshall players to the concept of a clean ‘normal’ channel, with simple volume, bass and treble controls to better compete with other super-amps of that era.

Familiar, gain, master volume and bass, mid and treble controls set the standard format, which has since been adopted by practically every other amp. The 2205 (50 watt) and 2210 (100 watt) amps were the first to feature Marshall’s diode-clipping circuit.

The 2205 and 2210 also featured a valve-powered spring reverb, with global presence and master volume controls. The JCM800’s also offered a simple series effects loop and a DI output with a level control.

Get the tone #1: Wylde about distortion

Wylde is known for using the 2203 JCM800 head, often with a Boss SD-1 distortion pedal. Humbuckers are also required. To get the sound of this solo, with the chord stabs in the verse, you need gain with a large dose of bass. The chorus is subtle, with a medium room reverb and a delay kicked in on the final note of the solo.

Get the tone #2: use your modulation

Estranged was recorded with various amps but it’s fairly certain the main one was a modified 2203 JCM800 from S.I.R. (Studio Instrument Rentals), used on the distorted parts. Effects, if there are any, are well back in the mix for the memorable solo. There’s a hint of MXR Phase 90 and a delay, but most of the sound comes from the amp and a Les Paul neck pickup.

Get the tone #3: this one goes to eleven

The legendary Spinal Tap axeman recorded the studio version with his 1959 Les Paul Standard into a JCM800. There are reports of Tufnel using a prototype amp capo too, but these have never been confirmed. It’s a purist tone: bridge pickup for rhythm distortion, neck pickup for the solo and a dash of warm room reverb.

Find the JCM800 model in your amp or software