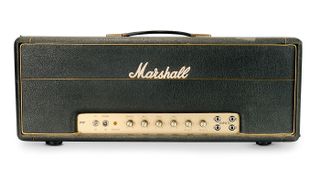 Marshall’s legendary 100-watt head was introduced in early 1965 following requests from several bands including The Who and the Small Faces for an amp with more power.

The ‘Plexi’ nickname refers to the control faceplates Marshall used on their earliest amplifiers, which were made from clear plastic with black lettering screen-printed onto the back face and over-sprayed with gold paint.

The earliest Super Leads used KT66 valves and had two output transformers; in 1966 the valve layout changed to the familiar EL34. The circuit remained more or less constant until 1973, when printed circuit boards replaced the earlier hand-wired models.

The Super Lead’s preamp features two non-switched channels, each with a pair of high and low gain input jacks and a volume control, feeding a shared EQ with bass, mid, treble and presence controls. One channel is substantially brighter than the other and players quickly discovered they could blend the preamps and slightly boost the gain by using a short jumper lead to link the channels together.

While earlier Marshalls owed more than a little to the 1950s Fender Bassman, the 1959 is generally regarded as the genesis of the true Marshall sound. It was the first Marshall to feature EL34s and the first amplifier head to sit on top of a 4x12 cabinet.

Associated with legendary players, including Jimi Hendrix, Jimmy Page and Paul Kossoff to name just three, The Super Lead truly is a product of its time, built before proper PA systems when backline had to reach the whole audience. It’s ferociously loud, characterised by a very fast response, wide dynamic range and sparkling treble, combined with a powerful bass and a low midresponse that’s mostly a product of the cabinet design.

The 1959’s dual non-switching preamp channels can be ‘jumped’ with a short lead to make both preamps active, allowing players to blend the two very different-sounding channels for a wide range of tones as well as giving a small gain increase. If you look at archive footage of classic rock legends like Jimmy Page, Jimi Hendrix and Paul Kossoff, you’ll often see a Marshall 1959 with the jumper lead.

Early Marshalls were based on classic tweed Fenders and used the KT66 valve, which was a British version of the American 6L6. The 1959 Super Lead was the first Marshall to use the European EL34 pentode, which was a key part of the bolder response that typified the ‘Marshall Sound’. In the early 1970s, amps shipped to America were fitted with the 6550, which was less prone to transit damage, but sounded different again, with more headroom and a stiffer feel.

The Marshall’s tone network was inspired by (or copied from, depending on which book you read) the 1950s Fender tweed Bassman, which was one of the first amps to feature a middle control. With no gain control and master volume, the amp has to be turned up very loud to produce any kind of distortion. Today, most 1959 users use a drive pedal in front of the amplifier combined with an attenuator, for more control.

Get the tone #1: Fat and clean

Many players associate Marshall with bonecrunching, aggressive distortion sounds, but with no master volume the Super Lead is clean for most of the volume control’s travel. The punchy dynamics and enhanced midrange are a perfect match for single coils; add a Strat and a decent wah and you’re knocking on the doors of Hendrix and SRV.

Get the tone #2: Super crunch

Unless you regularly play to stadium-sized audiences, you’re unlikely to get a real Super Lead up to the point where it breaks up, thankfully digital modelling makes it possible to achieve those tight, edgy powerchords typifi ed by AC/DC at sensible volume levels. A nice bright PAF-style humbucking pickup works best for this sound.

Get the tone #3: Brown sauce

During the late 70s and into the 80s, many Super Leads were modified with extra gain stages, master volume controls and channel switching, before Marshall introduced these features on their own models. Amp hot rodders like Paul Rivera Sr and Rheinhold Bogner played a signifi cant role in creating the sounds of top players, including Eddie Van Halen.