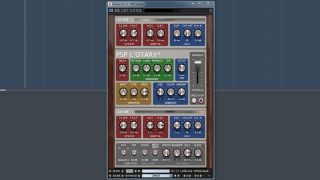 Despite the rich harmonising and doubling of Beatles vocals (whether real or via ADT), John Lennon would regularly request studio alterations to his voice. His plea to “smother it with tomato ketchup or something!” became, on Tomorrow Never Knows, an instruction to sound like “the Dalai Lama singing from the highest mountain top”.

Picking up the gauntlet, the studio team routed John’s vocals through the rotating Leslie speaker cabinet that gives a Hammond organ its distinctive swirling sound. The effect was so stunning that the Beatles would soon demand it for instruments as well as vocals. Examples include Harrison’s guitar on Lucy In The Sky With Diamonds; the rhythm guitars of Magical Mystery Tour and Something; and the tamboura and tom tom of Across The Universe. The spinning Leslie also provides a fittingly watery effect for the guitar and backing vocals of Octopus’s Garden.

Here, we'll show you how to create the same effect entirely in software.

Step 1: Originally designed to give the Hammond organ a quivering, church-like sound, a Leslie speaker features (usually) two speakers, one of which rotates inside its cabinet, creating a warbling effect. Here, we’ll bring the classic Beatles voice effect up to date and process a vocal track with a plugin emulation. Load Voice.wav into an 80bpm DAW project.

Step 2: We’ll be using PSP Audio’s L’otary 2, an excellent recreation of a classic Leslie speaker system. The default patch already adds character, but we’ll make a few alterations. The Speed lever allows you to blend between two speed settings: fast or slow. Move the Level up to around 90% to add in a bit of flutter. Next, add a touch of distortion by moving the Drive control in the Amplifier section up to 11dB.

Step 3: Modern recreations of classic designs allow us to do things that weren’t possible on the original machines. Expand the stereo image by turning the Width control to 200%. Also, try pulling the Mix dial down to 80% to bring in some of the original signal. You could try automating the Mix control throughout your track to increase or decrease the intensity of the effect.