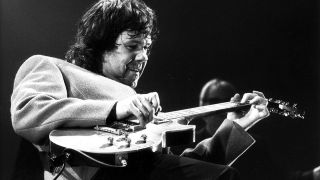 We are back on conceptual turf with a look at our fretting hand and - more specifically - how we choose and use our unruly digits. Right from the start, I should point out that the development and usage of all the left-hand fingers is vitally important to all guitarists.

However, I do think there are quite a few occasions when either limiting or carefully considering which ones you can use yields better results. This point particularly applies to rock and blues soloists, but some of it is valid right across the board. Hopefully some of what follows will at least make you think a little more about your options.

Before we get we started though, here’s a little food for thought - I think it is reasonable to say that a statement along the lines of “I didn’t like that guitar solo because [the guitarist in question] used the wrong fingers” is something that no-one said ever! Remember to always experiment with as many options as possible.

Example 1a and 1b

Yet another good reason to master this two-finger pentatonic approach is that as you advance to playing licks that involve stretches up to notes from a higher position, you need the grounding of the two-finger pentatonic fingerings first - particularly using fingers 1 and 2 to play the minor 3rd on the top two strings. This short lick should make this point clear.

Moving onto string bending it is often stated that when playing a string bend using your third finger it should be supported (where possible) by fingers one and two. Look no further than David Gilmour who is a true master of this. However, I also think when you bend using your longest finger - finger two - supported by your first finger it is as good and even possibly better for the control of bending and vibrato as the aforementioned third-finger method. This is what Gary Moore pretty much always did and he sounded great! Here are a couple of Gary Moore-ish examples and also a Van Halen-styled idea, all of which use the second finger for bending throughout - apart from the ¼ tone first-finger bends in Ex 3a, which should be played as indicated, with your first finger.

Have you ever wondered if Django Reinhardt played the way he did due to his limitations? He lost most of the use of his fourth and third left-hand fingers in a fire. However, with practice, he developed a brilliant mainly two-finger lead technique where he was pretty much forced to play more laterally on the fingerboard. I think it’s not unfair to say that as he had fewer fingers to choose from, his thought process would have been faster as a result. It was simply a matter of using one finger or the other. The nano-seconds we routinely spend thinking of which of the other two fingers to use must surely slow us down? Here is a very typical Django phrase - it is played using only fingers one and two and efficiently covers a lot of the fretboard. It’s hardly limited, that’s for sure!

Instead, try to fret the notes on the A, G and B strings as shown and then bring your left-hand thumb round to the front of the fretboard and play the B using the palm-side of your thumb. It might seem awkward at first and even hurt a bit but it is totally valid and, as a bonus, you will find you can reach notes that are impossible with any other way.

Incidentally, the Gadd4/D would be very nasty to play conventionally! I can’t think of that many players who use this technique, but one player who is brilliant at it is Scotty Anderson - check him out.