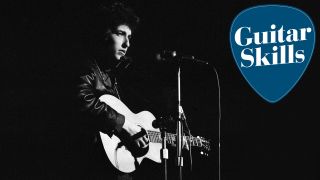 Guitar skills: Generally an acoustic guitar style, contemporary folk was huge in the late '60s and '70s and has broadened out ever since, with modern players such as Ed Sheeran and Jake Bugg channeling the pioneers.

What you need to know

Key: Folk guitar is often based on open major and minor chord shapes played fingerstyle or with strumming.

Singer songwriters make use of capos for easy pitching

The 8 best capos to buy now

Fingerstyle: Think of folk fingerstyle in terms of a bassline and a melody. Generally, the thumb takes care of the lower strings and the fingers play the treble strings.

Gear: A basic steel-string acoustic guitar is all you need – there aren’t really any sonic requirements. For strumming, a soft, flexible pick will allow you to attack the strings without getting too loud.

These chords are quite simple, based on open C and G major shapes, but you can use any spare finger to add more melody notes. The other hand fingerpicks the strings so use your thumb to pluck the notes on lowest three strings, your first finger on the third string and your second finger on the second string.