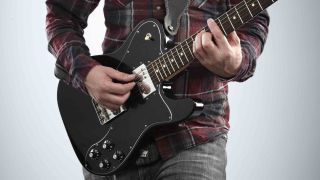 For big, clear chords that pack a punch, strike a rock pose with this lesson...

“What’s the deal with powerchords – how are they different from other chords?”

A chord is two or more notes played at the same time. Some chords have as many as six notes and use every string on the guitar. A powerchord is a two- or three-note chord. They have their name because they have a big, powerful sound.

A powerchord is written as a letter name followed by the number five. The first note is the same as the letter in the chord name (this is called the root note). Example 1’s first chord has an E root note and the second note is five notes above this. In this case this it is a B note. This is why it’s called an E5 chord.

“But I already play chords with way more than two notes, why do these puny two-note chords sound more powerful?”

Well, bigger isn’t always better. Six-note chords can sound messy and lack clarity, especially when the guitar has a distorted tone. This can be good for some styles but not for others. Powerchords work well because they provide a big, yet clear sound that’s perfect for heavier styles.

“Okay, okay, enough theory! Where can I hear them?”

They are everywhere. There are very few styles of music that don’t use powerchords in one way or another, but they are most popular in rock and metal. One of the earliest examples is The Kinks mega-hit You Really Got Me. You can also check them out on the metal classic Paranoid by Black Sabbath and All The Small Things by pop-punk veterans Blink-182.

It’s easy, all you need are two fingers... and a guitar. The great thing about powerchords is that a single shape can be moved up and down the neck. Simply lock your fingers into the powerchord shape and shift your hand as a unit to each different fret. Check and make sure that your thumb doesn’t drag behind as this will slow your changes.

“Splendid. I want more, though. What can I do?”

Well, you can make the powerchord sound fuller by adding the root note an octave higher. This means you play three strings rather than two. You can either barre your third fi nger across the two highest-sounding strings or play them with your third and fourth fi ngers. These three-string chords aren’t necessarily better than the two-string versions. Experiment with them and see which you prefer each time you use them.

This chugging progression will help you practise moving around the neck. Strum each chord once until you get the changes up to speed without errors.

This example changes both fretboard position and strings. Make sure you lock your hand in the powerchord shape even as you move between chords.

Powerchords can also be played lower down the neck in the guitar’s open position. To save you worrying about how you adjust the shape to account for the open strings we’ve mapped them out here for you.