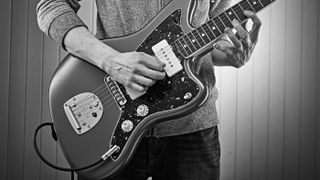 Start making up your own solos on the spot as we look at some of the ad libbing techniques of the legends.

Improvising doesn’t have to be hard. Maybe it gets its reputation from being associated with certain virtuoso jazz guitarists who take improvising to incredible levels. Still, you can easily get started armed with just basic skills.

Start by looking at the scales on the right. They’re used extensively by legends like Jimi Hendrix and BB King through to modern day players like Joe Bonamassa. Memorise the shapes - they can take you a long way. Simply play one note at a time from low to high. The dots tell you where to put your fingers.

“These aren’t too hard. How do they help with improvising?”

A scale gives you a selection of notes that sound good when you solo with them. Some guitarists worry that scales stifle creativity with hard, fast rules; we prefer to think of them as a framework that you can build upon with your own ideas. Learn the shapes, then let your own inspiration take charge.

Think about different ways to rearrange the notes. Our first tab example is just a run up through the scale. Simple enough, but we’ve chosen our first and last notes carefully. We used a Noel Gallagher style trick of starting on the note before the root. The last note is a root note - it makes the lick feel final and complete.

You can play in as many different ways as you can think of. It’s all part of phrasing - the way in which you shape sequences of notes into melodies or ‘phrases’. Our second tab example shows a phrasing idea where you return to the root note. Typically, you’ll get a steady sound.

Use string bends or hammer-ons and pull-offs. These are easy in the minor pentatonic scale. Or, think about rhythm. You could play four notes, then a pause, then repeat. Think of diff erent ways to group the notes; once you’ve exhausted your ideas, add in a random note from outside the scale. New ideas will unfold.

Two essential shapes to improvise with

Scales give you a small group of notes that sound good when used in solos. The minor pentatonic scale sounds great in minor-key rock, metal and blues over minor (Gm, Cm7 and so on) and ‘dominant’ 7th chords (D7 for example). The major pentatonic scale works in pretty much all major key music - try it in country and Southern rock jams. Move the shapes up or down the fretboard to start on a new root note and play in another key. Our tab examples below use the G minor pentatonic scale.

A run up through the scale is one of the simplest improv ideas. Why not try playing it backwards too? We’ve recorded this on the audio track for you.

2. Return to the root

By repeating the root note we’ve given this lick a solid, steady sound. We’ve also played the line an octave (12 frets) higher for you, giving the music a lift.