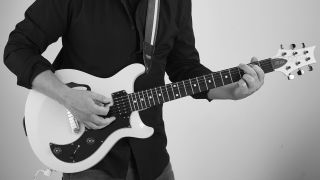 Okay, we will, but before we get into offbeats, let’s talk a bit about beats in general. Most music is divided into groups of four beats called ‘bars’. The beat is the musical pulse that you tap your foot to when you listen to music. If you count each bar ‘1 2 3 4’ you may find that beats 1 and 3 feel stronger than beats 2 and 4. Try it - you’ll see what we mean.

Most rock and pop music gets its feel from emphasising or ‘accenting’ weaker beats. This is known as playing the backbeat. Our first tab example is a simple guitar part that shows the backbeat in action.

Well, the four beats in a bar of music can be split in half to give eight shorter notes. These new notes are called ‘off beats’ because they sound just after - or off - the main beats.

“Where can I hear the best examples of this in action?”

The most obvious place to start is reggae and you can’t go wrong with Bob Marley. Songs like Could You Be Loved really show off the off beat ‘skank’ groove. For a more uptempo vibe check out Rancid’s ska punk classic, Time Bomb.

“Okay, got it. So how do I start playing offbeats?”

Start by counting ‘1 & 2 & 3 & 4 &’, this gives you the eight notes in the bar. Next, play a note or chord on all the ‘&’s - this is playing on the off beats. It’s quite tricky at first, so it’s easy to accidentally play on the beat and not notice you’ve gone wrong. Our second tab example shows D and A chords played on the off beats. Play along with our backing track - and remember, if you’re not playing at the same time as our guitar then you’ve gone wrong somewhere.

“That makes sense. Any technique tips?”

Of course! Move your strumming hand in a constant down-up motion in time with your count, making the off beats coincide with your upstrokes. This constant motion will help you get into a groove that will improve your feel for the music.

“What can I do to refine this sound?”

Guitarists often make off beats short and snappy, particularly in reggae. This ‘clipped’ sound is achieved by releasing pressure just after you’ve strummed the chord, muting the strings in the process. Don’t take your fingers all the way off , just stop pressing down.

Playing on beats 2 and 4 may feel odd at first, but it’s fairly easy as long as you count in time. Jam with the track to check that you’re playing the correct rhythm.

It’s easy to lose track of this rhythm, so count and concentrate! It’s possible to play these chords with downstrokes but we suggest starting with upstrokes.

1. Don’t forget the down

Even if you’re hitting the strings with upstrokes, you should still do ‘ghost’ downstrokes to help with timing and feel.

Pick a little harder to put some ‘snap’ into your upstrokes and help emphasise the highest-sounding strings.

Release pressure on the strings, keeping your fingers in contact as you do. This helps give a short, snappy ‘staccato’ sound.

You can’t silence open strings using the ‘grip release’ technique, so play only fretted notes if you want a snappy sound.