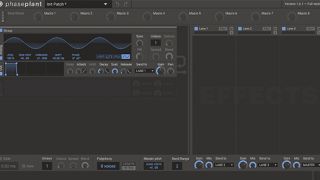 The unique but intuitive modular patching interface opens a whole world of sound design possibilities. Here we've had an explore of some the sounds that can be created with this unique modular softsynth and its range of inbuilt FX.

Step 2: Below this, we’ll load up a second Analog » Sine. The right flanking arrows show that this second signal isn’t being routed to the output – we’re going to use it to modulate the first oscillator instead. We’ll click the second Analog’s bottom-right mod button, then drag the green mod ring around the first Analog’s Phase parameter.

Step 3: The second sine is now changing the phase of the first, and its waveform changes shape to indicate this. Before we use modulation to make this timbral change more dynamic, let’s quickly adjust the signal’s amplitude envelope – we push up the Out section’s Decay to maximum, and extend Release to 100ms.

Step 5: We can also distort at the oscillator level by loading up a Distort module and dragging it just after the first Analog module in the signal path. Again, the waveform change is displayed in real time on the oscillator display. The benefit of this distortion is that it’s per voice – useful when playing multiple chord voices.

Step 6: To finish off, we call up a couple of Snapin processors in the first Effects column, found over to the synth’s right. A Faturator distortion and Ensemble effect give us the crunch and fatness we’re after. Each of the three effects chains can be switched into Poly mode, so each synth voice will be processed independently.