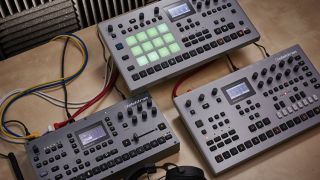 Elektron’s instruments are notorious for their steep learning curves, but the payback is deep and powerful workflow, incorporating sequencing, sync and routing options that go beyond most other comparably instruments. That’s why they’re such a great option for anyone looking to break their creative reliance on a DAW for live performance.

Here we’re using three of Elektron’s flagship instruments: the Analog Rytm MkII drum machine, Analog Four MkII synth and Octatrack MkII sampler. Each one offers comprehensive MIDI I/O, along with an assortment of audio inputs and outputs, so there’s no one definitive way to bring them together. We’re using the Octatrack as our central hub, mixing and processing sounds from the other two instruments, but you could instead feed the Octatrack into the Rytm to process the sampler with the latter’s excellent compressor.

Both the Rytm and Four have multiple audio outs of their own too, meaning you could send individual sounds from each into external effects and a mixer for extra creative control. The Octatrack is acting as the clock source for the Rytm and Analog Four, as well as processing audio from both via its inputs. The Octatrack doesn’t really play nicely with computers, lacking USB MIDI and Overbridge support, so it’s at its best used as part of an all-hardware performance or production setup.

In the settings menu for each instrument we can control what MIDI info is sent and received. We switch clock send on for the Octatrack and Clock receive for the Rytm and Four. The Octatrack uses a system of ‘Machines’ to set what each of its eight tracks are used for. We load Thru Machines onto two of its tracks. For the first, we route audio from inputs A/B (connected to the Rytm) and for the second, from inputs C/D (connected to the Analog Four). In the Settings, we turn down the direct signal, so that the two instruments are only running through the Machines and not directly to the outputs.

Because we’re using Thru Machines, we need to add at least one Trig to the sequencer for those channels to hear the audio. We can use the track LFO, amp envelope and effects to shape and manipulate these tracks. We’re using the Rytm for beats. It’s a drum synth but it also has decent sampling capabilities, enabling samples to be blended with synth drums for interesting layered sounds.

We’ve loaded the Rytm with an assortment of found sounds to add weird textures, but we could also use its inputs to sample on the fly. Sampling beats and one-shots via the Rytm frees up the Octatrack’s sample tracks for sampling longer melodic lines and recording loops from the Rytm and Analog Four. The Analog Four is just four-voice, but its four sounds can be sequenced and edited separately, so it can effectively act as four monosynths if we need it to, or a single polysynth.

There are CV outputs available, too, which we could use to hook up to Eurorack gear, to take things further. We could also add a vinyl turntable to this setup, routed into the sampling inputs of either the Octatrack or Rytm, for a bit of old fashioned sample slicing. All three instruments feature Parameter Locking, so we can automate most parameters. Each has deep Chain and Song modes, too.

Between these three boxes, we can create full arrangements with plenty of movement and variation. Conditional Trigs are a great feature, letting us set up sequencer patterns that react to certain events or probability - great for variation and randomisations.

The pros and cons

It’s quite remarkable how much flexibility we can get out of these three boxes in terms of sonic manipulation and sequencing. Once you start modulating things using the plentiful supply of LFOs and envelopes, and making use of the P-Lock automation, it doesn’t take too long to come up with all manner of truly weird sounds.

There are a few downsides to a setup like this, though. The first is price: each of these machines comes in at over £1,000. For a cheaper, but still fairly flexible alternative, consider swapping the more affordable Digitakt for the Octatrack, or replace the Analog Four with Elektron’s recent FM synth, Digitone. As mentioned, there’s also a steep learning curve with Elektron gear, so be sure to keep the manuals handy.

Lack of polyphony is another factor: the Analog Four is only four-voice. Try getting around this by sampling sounds to the Octatrack and layering them up. Alternatively, add an extra polysynth and sequence it using the Octatrack’s MIDI channels.