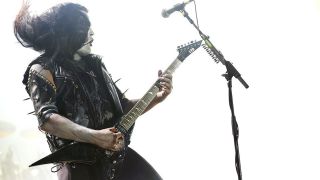 From the faux Satanism of 1980s thrash groups like Venom to the ‘mass psychosis’ of Norway’s notorious Inner Circle and beyond, black metal’s evolution as a genre of extreme music has been a difficult one.

While many bands still employ the pageantry of corpse paint and occult symbolism, it’s the signature wall of sound - especially the use of frenetic tremolo picking paired with blast beat drumming - that has seeped into a diverse range of 21st century heavy music. None more black? You be the judge...

Emperor
Anthems To The Welkin At Dusk (1997)

By the late 90s, black metal was acquiring a surprising air of respectability, and Emperor’s sophomore release did much to legitimise the genre for an audience still focused on the scene’s unseemly origins.

There’s a sense of real scale here, from the huge production sound and full-bodied arrangements to the hints of symphonic and progressive rock in Ye Entrancemperium and Thus Spake The Nightspirit which, despite the signature torrent of blast beats and dense, tremolo- picked riffs, utilise more hooks, harmonies and clean vocals than ever before.

Synthesizer and strings add some gothic texture to tracks like Ensorcelled By Khaos and bolster the scorching instrumental The Wanderer without being overblown.

Aarseth’s unconventional chord progressions and light-speed picking push songs like Cursed In Eternity and From The Dark Past into a vortex of impenetrable aggression, while the chiming, lurching tempo changes of Freezing Moon betray the influence of thrash stalwarts Kreator and Bathory. One of black metal’s most enduring founding documents.

While anthemic hooks are not exactly a mainstay of frosty black metal, Immortal’s Olve ‘Abbath’ Eikemo would likely argue to the contrary.

At The Heart Of Winter imbues its frigid source material with complex thrash phrasings and fantasy-inspired themes and adds a melodic, hard rock chutzpah to songs like Where Dark And Light Don’t Differ and Years Of Silent Sorrow.

An unabashed guitar album, there’s ambitious leads crammed into every corner of these songs, made all the more accessible by Abbath’s balancing of mid-tempo riffing and full tilt assault, as well as the odd ambient passage whetted with synth on the grandiose title track and fan-favourite Solarfall.

Darkthrone
A Blaze In The Northern Sky (1992)

Darkthrone’s first album of the black stuff wholly embraces the minimalism of Norway’s underground scene, and while it retains elements of death metal, there’s a coarseness to the instrumentation and lo-fi production that hints at 80s crust punk and hardcore.

The sludgy, drawling riffs of Kathaarian Life Code and Paragon Belial recall the sound of Celtic Frost, but a stylistic shift at the album’s halfway mark drops it into far darker territory, as blast beats and breakneck gallops dominate the title track and The Pagan Winter.

Recommended track: A Blaze In The Northern Sky

Shining push their theatrical brand of misanthropic black metal to such absurd heights that some have - only half- jokingly - labelled it ‘postmodern’.

Long before 2015’s eclectic The Ark Work had purists crying “Judas!”, Liturgy had already delivered one of black metal’s most progressive and divisive statements: an inversion of the genre’s rote nihilism, Aesthethica’s spiritual themes are hard to quibble over when executed with such emotional intensity and machine-like precision.

Highlights True Will and Sun Of Light unleash a firestorm of syncopated tremolo shredding, and convulsions of treble-pinched guitar seem to short-circuit High Gold into sheer euphoria. Though the vocals may lack much in the way of muscle, the polyphonic chanting on Glass Earth and Harmonia are a welcome oddity.

Most live black metal albums fail to capture its chaotic energy, which is perhaps why Wolves in the Throne Room’s slow-burning blend of elemental post-rock and black metal works so well on this set culled from Roadburn. Vastness & Sorrow and Cleansing lose a little of their melodic subtlety to the mix but gain a bellyful of grit in return, while I Will Lay Down My Bones... resembles a charcoal-blackened Neurosis, stretching out across 20 cavernous minutes of melancholic post-metal riffing.