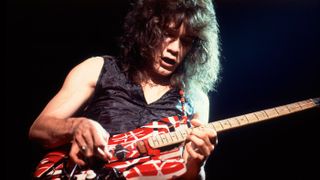 In the history of guitar playing there have been some extremely notable and groundbreaking players - and there’s no doubt that Eddie Van Halen is one of them.

When he burst onto the global music scene in 1978 with the release of Van Halen, he sent thousands of guitarists (including yours truly) scurrying away to try and work out what on earth he was doing! And that was no mean feat.

Also, we can’t forget his variax-ed Marshall amps, homemade guitars, effects usage and overall rig setup - all of which are elements that helped him achieve what is now the undoubted benchmark for classic rock guitar tone, the ‘Brown Sound’.

This initial lick kicks off with the A string E note that’s approached from below by picking the string and then releasing the already depressed tremolo arm - simple but very effective.

After this, we have some open-string pull-offs followed by a series of artificial ‘tapped’ harmonics. The trick to playing these well is to make sure the string is constantly in motion via your fretting hand vibrato and that you also tap the node points in exactly the right places.

Although you should perform these exactly over the fret wire, sometimes tapping a point a teeny bit either side will get better results. Experiment and before long it will become second nature.

Eddie often uses large string bends such as this major 3rd D-F# idea that’s found at the end of bar 5.

This is preceded by a series of smaller bends each with following cut-off notes, which all creates melodic/dramatic interest. At the end of bar 6 is another common EVH idea where an open string is used as a ‘connector’. It works really well and maintains the flow of the solo by avoiding a potential silent ‘gap’ that might occur as you change fret-hand positions.

Bar 7 and 8 is an example of a ‘left-hand-only’ hammer-on phrase. Release the tremolo arm and perform a left-hand hammer-on to the D note (7th fret G string) that you then hammer on to the E then pull off back to D. After this last note has sounded, the remainder of the phrase is played in a similar way, only on the D and A strings. After the final E has sounded in bar 7, there is then a fast slide down to the D at the 5th fret in preparation for the final wide vibrato E note.

Two-handed tapping is without doubt one of the techniques most associated with EVH. He didn’t ‘invent’ the technique, but he certainly is the person who popularised it and took it to the masses. Complete tracks heavily featuring the technique such as Eruption and Spanish Fly were revolutionary, the like of which had never been heard prior to EVH coming along.

The four-bar phrase in bars 9 to 12 is very typical and involves the notes D and B in the left hand, while the tapped notes ascend and descend in sequence above. Notice how all of this idea (apart from beat 1 of bar 9) is played in 32nd notes.

It’s a common misconception that all tapping licks are triplet based and sound like ‘wid-de-ley, wid-de-ley’. In reality, they are often fairly rhythmically varied and 32nd note phrases such as this, or odd groups like the quintuplets in Spanish Fly are also used. Having said this, you can play this section in groups of six or eight - it will work fine both ways.

Just make sure that you rest one or more of your picking hand digits somewhere to help give you some stability, accuracy and support. EVH generally taps with his first finger and uses the others - mostly his third and fourth - to add support by placing them under the neck.

Personally, I rest my thumb on the top of the neck, hold my pick under my index finger and tap with my second finger. Both ways obviously work perfectly fine - as always, simply use whichever one suits.

This section starts off in bars 13 to 14 with a rhythmic idea that’s great for injecting some nice rhythmic interest into your tapping lines. To play it correctly, all you need to do is perform the triplet pick-up and then hold the tapped note - while adding some vibrato with your fretting hand - and then repeat the process again with a moving tapped note.

Bars 15 to 16 illustrate a few ‘tapped slides’. This is a cool effect in which you simply slide your tapping finger off each tapped note in an upward direction. There is no specific melodic destination here - it’s the sliding ‘sound’ and effect that really matters. Incidentally, licks like this are often very hard to notate, so please listen to the audio/ watch the video if you find the notation difficult to follow.

Rapid tremolo picking passages are a very typical EVH idea. To play these it’s vital that you have a relaxed picking hand. EVH does not anchor his picking hand at all when he’s tremolo picking and the picking motion seems to come mainly from wrist and forearm rotation. He also holds the pick (nylon and a light 0.6mm thickness) between his thumb and second finger.

Here, I’ve tried to cram in as many ideas as I could manage! The initial lick was just what I did at the time of filming the video, but the last two ideas are an EVH ‘trademark’ high pinched harmonic in bar 24 and the divebomb: ie, the slow low E string tremolo decent seen in bars 25 and 26.

You will notice in the video that I bring my left hand round to take over the divebomb. Doing this frees up my picking hand so I can turn the guitar’s volume off at the end. It’s worth being able to do, especially live when feedback often awaits!