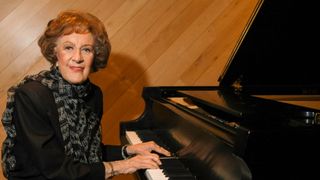 The world lost a tremendous musician, mentor, and evangelist when the pianist, composer, and radio personality Marian McPartland passed away in August 2013. Born Margaret Marian Turner in Slough, England in 1918, she married Jimmy McPartland, an American soldier and cornetist. After World War II, the McPartlands moved first to Chicago and then to New York City where in 1952, Marian began her residency at the storied Hickory House on 52nd Street. Later, her famed program Piano Jazz was launched in 1979.

Marian’s piano style is very eclectic and nearly impossible to categorize. Here are five concepts gleaned in Marian’s playing that you can practice and add to your own.

Ex. 1 is a typical McPartland 12-bar blues device of the left hand keeping a triplet figure while the right hand improvises using mostly pentatonic material with chromatic embellishments. When practicing this, try to get the bass line under your hands first so you don’t need to think about it. Then start adding right hand lines. You can also try building ideas using the A minor and C minor pentatonic scales. (Note that the minor pentatonic scale contains scale degrees 1, 3, 4, 5 and 7 from the natural minor scale.)

Ex. 2 is influenced by “Kaleidoscope,” the theme song to McPartland’s long-running NPR radio show Piano Jazz. Here, the right hand arpeggiates simple triads with fifths in the bass. The interesting thing about these shapes when used together is the harmony that they imply. The first slash chord C/F suggests an Fmaj7 tonality. The Eb/C slash chord in bar 2 suggests a C minor tonality. Try creating your own chordal combinations and also try switching the direction of the triad arpeggios for new sounds of your own.

The lush piano chords in Ex. 3 are influenced by Marian’s beautiful ballad playing. Here, the right hand delineates a decisive harmonic motion while the left hand comps and plays light fills in the middle of the chords. Notice how the majority of the musical material is coming from chord-to-scale relationships.The left-hand part in bar 2 is derived from the Eb Major scale. (Also notice a clever right-hand “diminished trick” often used on major seventh chords on beat 2 of bar 2.) In bar 3, the right-hand chords come from the A Dorian mode. The key to developing this kind of harmonic fluidity is to master ii-V-I progressions and basic major and minor scales in all 12 keys. Doing so allows you to see and hear your way through the chord changes without having to think about them.

Ex. 4 is another technique found in Marian’s often playful piano work: harmonizing a quarter-note melody. Bar 1 begins with “drop 2” chord voicings (where the second note from the top is “dropped” down to the left hand). It also features a scalarbass line. Bar 2, beat 1 starts with the famed b13b9#11 chord and is then followed by modal “planing,” (moving fourthvoicings while keeping their shapes intact). Bar 3 demonstrates right hand fourth voicings over left hand “shells” (basic voicings that form the building blocks of chords). The last bar illustrates how even smallest of melodic movements can impart huge harmonic contrast.

Ex. 5 shows how Marian McPartland often creates compelling “chordal illusions” using just thirds and octaves. Over a simple “cowboy” bass line, here we play chromatically around the third of the G and D chords. Notice the right hand shape—the third in the middle of the octave line gives the illusion of a much bigger chord. The octaves on the outside and the bass line furnish the listener with the harmony. The listener’s ears then fill in the rest.

“I was lucky in my late teens to study piano with Ellen Rowe, who was working with Marian McPartland at the time. The chord voicings and other techniques I learned from Ellen’s transcriptions of Marian had a profound impact on my musical development,” says keyboardist and composer Brian Charette, who has performed and recorded with artists like Joni Mitchell, Michael Bublé, and Rufus Wainwright, in addition to leading his own jazz groups. His latest album is Music for Organ Sextette, on SteepleChase Records. Find out more at kungfugue.com.