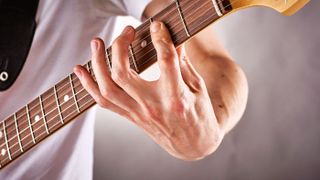 30-day guitar challenge: It's day three, and we want you to limber up and flex those fingers.

Give your fretting digits more strength and independence with our guide to essential fret-hand techniques.

This Chili Peppers-style riff is based on a Bm chord played with a first finger barre on the top three strings.

These jazzy George Benson-style chords are all variations on a C major sound; although they all look similar, the fingerings are quite different.

This lush chord progression is inspired by Pink Floyd’s Dave Gilmour. Start with a first finger barre across the 7th fret and check that each note is clear and clean. Next add your third and fourth fingers to create the Bm, then move those two fingers up a string to make a Bsus4. Finally, replace your fourth finger with the second finger for the Badd11.

Start with your first finger at the 12th fret, then move down to 8th fret and finally 4th fret. As you descend the neck, you will feel the stretch become more intense. If it is too uncomfortable, try moving down one fret at a time until your hand loosens up.