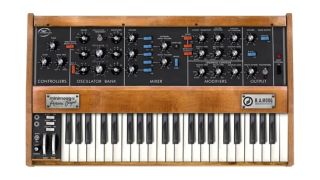 A world of possibilities opens up when you tune two or more synth oscillators in various ways, relative to one another. Let’s explore.

Here’s a classic sound, the warm beating of oscillators drifting ever so slightly (or not so slightly) against each other. A common approach is to use the same waveforms and have one oscillator tuned to exact pitch, and then set the other oscillator slightly sharp or flat, usually by only a few cents. A better approach is to spread both oscillators a bit, setting one slightly flat and the other slightly sharp. This doesn’t pull your ear in a specifically sharp or flat direction. It’s also a better approach when you want wider or more drastic detuning.

Power tip: Some synths (like the AL-1 engine in the Korg OASYS and Kronos, or Native Instruments Absynth) have advanced means to control tuning via offsets, ratios, or other methods. These differ from conventional tuning or fine-tuning parameters in that they can impart a constant beat frequency (the modulation you hear when two notes, like synth oscillators or guitar strings are almost but not quite identical in pitch) across the whole keyboard, rather than the usual “smeared tuning” sound you get from detuning.

If you don’t want to “spend” two oscillators to achieve this sound (or your synth only has one oscillator) look to the waveform choices offered and see if there’s a variant that is already detuned. Roland was the first to offer that in their JP-8000 hardware virtual analogue synth, with its “supersaw” that used DSP to stack up to seven detuned sawtooth waves while only using one voice of one oscillator. Many other synths now offer this type of wave, calling it “HyperSaw” or some other telltale variant. Another approach is using the Unison parameter in your synth, many have this and it lets you set both the number of voices used and their detuning amount. Just note that if you want to use another oscillator for a different waveform or effect (like sync, perhaps), Unison will also affect that.

If you want to recreate the slight drift that older analog synths had, you should use a different approach. I’m not talking about overall pitch drift (which may be available as its own parameter in your synth and called something like “analog drift” or “humanize”). I’m talking about the variation of the interval between the two oscillators. This is subtler, as it’s the sound of oscillators trying to stay in tune but drifting in and out slightly. Using tuning offsets like the above means that the given oscillator is always slightly sharp (or flat), and that’s not the same. What to do? Use an LFO, set to either a triangle or sine wave, to modulate the pitch of one of the oscillators. The rate should be slow and the depth set to taste. This produces a variation in pitch that includes returning to perfect unison in between sweeping slightly sharp and slightly flat.

One trick I like here is to set the modulation depth to a known interval (whole step, fifth, octave) for reference while I choose the rate amount, as it’s easier for the ear to detect the rate of a sweeping interval than very subtle pitch variations. Once I get a rate I like, I then reduce the depth a suitable amount. If you’d rather not have such a repeating, periodic change in pitch, see if your synth offers a random waveform for the LFO. U-he’s free soft synth Podolski (shown) is one example. Some synths offer random shapes, some producing more stepped changes, others yielding smoother but still changing values.

Tuning oscillators in pure intervals is another classic sound, and there are plenty of permutations to explore. The most common choice is setting a second oscillator an octave above or below the first. Both synth leads and synth basses do this all the time. Be sure to try mixing the oscillator volumes in various ways, they don’t always have to be the same level. Some synths have a sub-oscillator fixed at an octave (or two) down. Great, that frees up your second oscillator for some detuned doubling, or to produce yet another octave, so you could get 16', 8', and 4' “footages” in the same patch.

Tuning a second oscillator a fourth (+5 semitones) or fifth (+7 semitones) above the first produces a Chick Corea-style fusion lead sound. If you reduce the level of the detuned oscillator it becomes less dominant, acting more like a harmonic of your main sound and less like an obvious interval. I especially like to raise the tuned oscillator an additional octave (+19 or +21 semitones, i.e., one octave plus a fourth or fifth) and just blend it in a bit. Also, be sure to try different waveforms for the tuned interval. Triangle, sine, or wide pulse waves can help soften the harmonic.

I’ve been hearing oscillators tuned in minor thirds (+3 semitones) and major thirds (+4 semitones) in electronic dance music. This is less “inside” sounding and works better for melodic parts that aren’t necessarily about the old-school “let ’er rip” type of soloing. Don’t be afraid to explore these! Likewise, tuning three oscillators to produce a minor or major triad can sound like a sampled chord hit, and maybe just the effect your track needs.