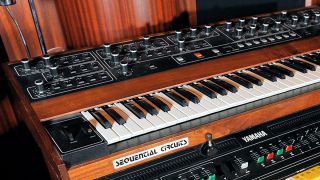 Neon lights, lasers and flying cars… The 1980s portrayed a spectacular vision of the future. Sadly, we never did get that space-age lifestyle, but we did gain a body of music which influenced a modern genre.

Synthwave is a synth-heavy type of music that takes inspiration from the sounds and imagery of the ’80s and repackages them for a modern audience. Its roots can be heard through synth-laden film and television scores of the era, such as Brad Fidel’s work in The Terminator and the biting action of Jan Hammer’s Miami Vice. More recently, the 2011 movie Drive and 2016 Netflix series Stranger Things brought the genre to public attention, and it’s been growing in popularity ever since.

If you’re a synth fanatic looking for a musical home, synthwave could be the genre for you. It’s a rapidly growing movement, so now is the time to equip yourself with the knowledge of how it’s all put together. And with these 11 tips, we're giving you a flying start.

For more synthwave production advice, pick up the June edition of Computer Music.

It may sound like every synthwave track contains a pad, but that isn’t necessarily the case. The use of long reverbs on melodic elements creates a massive reverby background. Try compressing the reverb to bring the ambience up in the mix for a sustained, pad-like timbre.

Like reverb, delay is extremely important. For the vintage flavour of synthwave, check out the crunchy, old-school repeats of Sonic Charge Permut8. To go even further back in time, use a delay modelled on a classic tape delay machine such as u-he's fabulous Satin.

Many synthwave sounds appear to come straight out of an old VHS machine or arcade game. For a distinctly lo-fi sound and plenty of old-school dirt, stack several stages of light saturation and gentle bitcrushing.

Synthwave patches are generally basic, as ’80s synths were much simpler in their architecture than the digital powerhouses we work with today. Keep true to this heritage and use raw, straightforward sounds.

The synthwave genre uses its elements sparingly, but the liberal use of effects means things can get dense quickly. Aim to strike the right balance between modesty and density.

ROMplers and emulators of digital ’80s gear are used frequently in synthwave. Check out UVI’s Digital Synsations, which gives you the iconic sounds of four classic synthesisers.

Pitchbending leads are common in synthwave, often mimicking a screaming ’80s guitar solo. Waggle the pitchbend wheel on your controller, or draw pitchbend curves via automation.

A common bass sound in synthwave is the Fat Line Bass preset from the Korg PolySix software synth. Loading in a preset is easy, but you’ll instantly sound just like everyone else, so learn how classic synth sounds like this are made to create your own take on them.

Synthwave uses a lot of reverb… but how much is too much? There’s a fine line between ‘dreamy’ and ‘muddy’, so EQ your reverb returns to sculpt the timbre of your virtual ambience and avoid swamping the mix.

10. Get inspired by retro videogames

It’s no coincidence that there are branches of synthwave known as Road Rash and Out Run, named after computer games of the ’80s. Synthwave often borrows from old game music, so have a listen to retro soundtracks for arcade inspiration!

Synthwave tracks feature dusty, ambient backdrops. Get this effect in a flash by layering field recordings or tape hiss samples quietly in the mix.