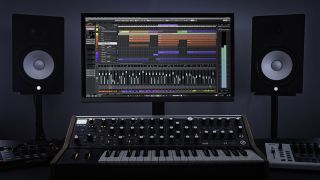 Computer technology speeds ahead at a furious pace. In an industry where the shelf lives of new products are often measured in months, 30 years is an eternity.

Back then, Cubase was designed to allow musicians to sequence their MIDI hardware - a task at which the current version of the program still excels. Always on the move, within a few years, the company would add audio recording and eventually spearhead the shared plugin format with VST effects and instruments.

This constant evolution and refinement continues with the newly-released Cubase Pro 10, which sees massive improvements to nearly every aspect of the program, plus a few new tricks besides.

Here, we'll show you just ten of those new goodies, and you can find out about the rest of them in the March 2019 edition of Computer Music.

If this world isn’t enough for you, you might be inclined to pitch your music to the denizens of virtual reality. Thanks to the newly-added Steinberg Virtual Reality production suite, you can enjoy professional tools for producing content for VR games and video. VR-ready features include a third order Ambisonics bus, HMD connector for head tracking, and an integrated Binauraliser. You’ll also find a VR panner in the VST Multipanner.

Cubase Pro and Artist now support the new MPE MIDI standard, for compatiblity with various state-of-the-art MIDI controllers. With MPE - or MIDI Polyphonic Expression - each note’s messages are transmitted on a separate MIDI channel, cycling through a set of what the protocol refers to as ‘Per-Note’ channels. Before MPE, pitchbend and other Control Change messages were applied to every note on a single MIDI channel. MPE does away with this limitation, allowing for new methods of expression using, for example, ROLI’s Seaboard or Haken’s Continuum Fingerboard.

Cubase 10 automatically recognises the most common MPE controllers and includes MPE-enabled presets for both Retrologue and Padshop. We can’t express our elation over this new functionality… Oh, wait - maybe we can!

Cubase can now employ a ‘Video Follows Edit’ mode that does exactly that, updating video to represent the current position of any MIDI note or audio region you’re moving about. This is sure to help anyone engaged in scoring video or doing foley work. It’s exclusive to the Pro version.

Those who collaborate with Pro Tools-based musicians or studios will be thrilled to hear that Cubase Pro 10 now provides import and export of the AAF project format. Sure, OMF support was already there, but it was long in the tooth. AAF is the preferred method these days, so it’s great to see this option come over from Nuendo.

Oh, the maddening scrolling that we had to endure when right-clicking (or Ctrl-clicking) a clip in the old Cubase! Compared to the new contextual menus in Pro 10, the old menu seems positively endless. Now, the menu that pops up is context-sensitive and sensibly arranged. For example, the Processing options are at the top of the menu when clicking on an audio file, which is exactly where they should be - they’re the ones we use most often, after all!

Nearly every aspect of Cubase’s interface has been updated for version 10. Many of the editor windows have been redesigned for better clarity - this will be most noticeable to users with HiDPI 4K or Retina displays, who will appreciate the higher resolution of nearly every aspect of the GUI.

Additionally, track icons have been redesigned to be more instantly recognisable at a glance. It’s these kinds of thoughtful touches that make Cubase 10 a real pleasure to use.

While we’re on the subject of interface improvements, we should take a moment to express our approval of the upgrades Steinberg’s developers have made to many of the included plugins. Magneto, REVerence, Bitcrusher, Studio EQ, Cloner - they’ve all got sleek new looks.

You can, of course, still take control of many aspects of Cubase Pro 10’s interface. Cubase has always allowed users to determine the colour of the clips displayed in a given track. The paint bucket tool is no longer found in the toolbar, but optionally shown. And the Colorize window will now stay open until you close it, allowing you to step through the colours that might be applied to selected clips.

Latency monitoring can now be activated for your MixConsole channels - a constant reminder of the impact each effect is having on overall timing. There’s a latency monitor available just above the panner on each channel, and you can open a Channel Latency Overview panel to see exactly how much delay is caused by each instantiated plugin on that channel.

There are plenty of awesome additions to Cubase 10 that we’ve not had space to cover here, so as we trail out, we’ll leave you with a few pointers towards some of them. For example, there are an astonishing 20 new impulse responses from vintage reverb units for REVerence. Also worth mentioning is the fact that Steinberg have added support for 32-bit integer and 64-bit audio file formats. They’re not stopping there, either, having already promised forthcoming extended intercommunication between Cubase and ARA-enabled plugins such as Celemony’s marvellous Melodyne