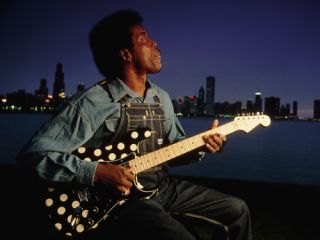 Another week, another tasty star soundbite from the Guitar Techniques archive. Here's American blues guitar legend Buddy Guy on sitting back, listening, and learning from the greats…

"I played with Lonnie Johnson, Fred McDowell, Son House and I played with Muddy [Waters]. The first time I met T-Bone [Walker] I was in London. And I met Elvis in February 1965. I would've liked to have played on the same stage as Elvis, I mean, who wouldn't want to be up there with that guy? I had the chance to jam with Hendrix in a live format, not in the studio.

"There are times when somebody like BB [King] or Eric [Clapton], when they play they look round at me and say, 'Come on, play!' and I say, 'Look man, you play, I'll listen. I'm trying to learn something...'

"I think BB King still is the most important blues player. I mean, that guy invented this thing. If you go watch him play, man, you hear something and you say, 'Shit, I just gotta go back to school!'"