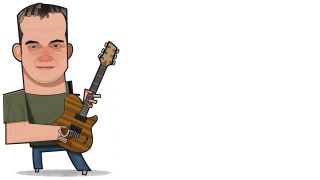 I read an interesting article on MusicRadar recently that featured an interview with ex-Police drummer, Stewart Copeland.

The interviewer, Joe Bosso, referenced Copeland's notion of 'playing outside your instrument' and he explained it via his enjoyment of playing polo - "you shouldn't be thinking about riding. You have to think, 'here's the ball. I need to get it there.' You're thinking outside your horse and playing the game. Put this to music; the mechanics of playing an instrument should be furthest from your mind. You've got to think about the music; 'What is the music? Where are the other players? What's going on? Where's the groove?' - things like that. What your technique is - that should be completely subliminal."

He has a point and presents an ideal scenario to play music in. What it does mean is a lot of preparation before a gig or a studio date to get into a 'play the music, not your instrument' zone. Ultimately, how you do this is down to you. One representation could be how much you look at the guitar's fretboard when playing: maybe the stage lights are so intense a cursory glance isn't enough to see where you are; you might have lots of position shifts to make so need to get them right; your improvised solo can seem more secure when watching your fingers. Issues like these aside, it can be worthwhile spending time not looking at the guitar at all when practicing.

One great tip is to look up at the ceiling as you play - does your hands have great muscle memory and do you trust them? Indeed, are you repressing your natural playing instincts - even underplaying the role of your ears - by regular visual referencing? Of course, long bouts of ceiling staring on a gig can look a little odd so instead this could instead morph into looking out into the audience. Now that has a strong knock on effect - you're playing well and acknowledging the audience (maybe even winking at a few). They will often like you for this. So to cultivate the audience 'look out', you may like to try what some guitarists I know like - playing in front of a mirror. You get to develop better posture (less hunching over the guitar) plus fine tune your look out at an imaginary audience. It may sound amusing, but mirror practice can be a real gamechanger for you and your music.

So consider how you play and mull over Stewart Copeland's 'playing outside your instrument' - it may just make you a better and more audience friendly musician!