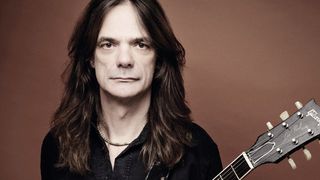 Before he jumped in his limo for the airport, we grabbed a quick minute and chucked a dozen questions at blues-rock legend Larry Miller...

Rory Gallagher - the tone he got on his album Live In Europe, I'd never heard anything like it.

Rory's Strat - it just looked like an instrument from another planet!

Cambridge Rock Festival 2009 with our seven encores! We were the real underdogs playing the Blues stage, meanwhile the PA went down on the main stage so the whole festival audience moved into our gig - and they wouldn't let us go! Encore after encore - what do we play next? I've never been hit by so much love from an audience.

I was really young and playing to 2000 people but my guitar was constantly going out of tune, all the way through the gig. It just wouldn't stay in tune and people were shouting, "Get on with it" etc. I got home and found the screws holding the neck to the body were all loose!

More than ever, and I feel I'm getting better all the time.

Because I sing as well, I have to warm up my whole body and there's a real art to it. And all through this process I have a guitar with me, which I'm playing for at least an hour before going on stage.

If you could put together a fantasy band with you in it, who would the other players be (dead or alive)?

Who's the single greatest guitarist that's ever lived?

For me it's Rory Gallagher.

Is there a particular solo you really wish you had played?

The Millionaire Waltz by Brian May from Queen's A Day At The Races.

What's the solo or song of your own of which you're most proud?

From my Fearless album, a track called Yours And No Other. I used a really weird tuning on my Martin D-35 - I think it's called 'poetic' tuning (FACGCE) and it was like starting the guitar all over again; every chord I had to make up myself.

That even though Larry Miller earnt millions from record sales he was still a nice guy (laughs)!