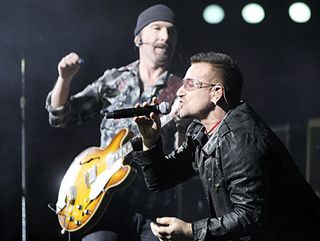 Who are the biggest band in the world? Opinions tend to change with whoever's on tour, but on this evidence it'd be hard to argue with giving the accolade to U2.

The Irish band's eagerly-awaited live DVD U2360° At The Rose Bowl will be released in the UK on 7 June (four days earlier for those lucky blighters Stateside), but we're very proud to be able to say that we've seen the content for ourselves.

Without giving too much away, the show itself is truly gargantuan, with guitarist The Edge proving yet again just how inspirational he can be. There's a huge swathe of extras, and the whole thing will, of course, be available on Blu-Ray too.

Barring the Second Coming, we'll be running a full review in the July issue of Guitarist, which goes on-sale 8th June; talk about perfect timing.

What's more, the DVD will whet appetite for U2's appearance at Glastonbury 2010 on 25 June.

In the meantime, click here to watch the official trailer on U2.com