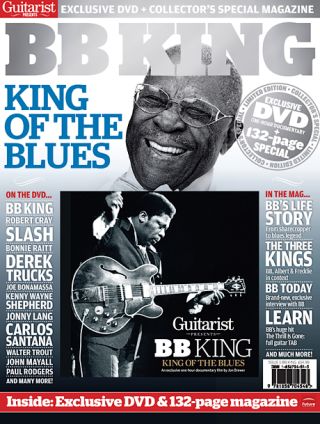 Guitarist Presents: BB King King Of The Blues combines an exclusive one-hour documentary about the incredible life of Riley B King by acclaimed filmmaker John Brewer, and a gorgeous coffee table magazine that through words and pictures tells the story of The King, his impact on the blues and wider music, and will teach you how to play in his trademark style.

This one-hour DVD documentary from John Brewer is exclusive to Guitarist and delves into the life of the greatest living bluesman with superb new interview footage and archive material. Focussing on the great man's unique skills, there are guest contributions from Carlos Santana, Derek Trucks, Kenny Wayne Shepherd, Robert Cray, Paul Rodgers, Slash and many more. This exclusive DVD is a prequel for the highly anticipated biographical film currently in production, BB King: The Life Of Riley.

This glossy 130-page magazine tells the story of BB King's journey from a poor sharecropper in the Mississippi Delta to the greatest living bluesman and one of the most recognisable guitar players in the world. In addition the magazine looks at the making of John Brewer's documentary, his place in blues as one of the Three Kings, the classic albums that defined his long career, and the milestones that have elevated to the revered status he holds today.

Guitar players will also be well catered for, as the magazine looks at the varied instruments that have allowed BB to make his music over the years - they're all different but each one's named Lucille. In addition, there are lessons on BB's unique guitar style from the makers of Guitar Techniques and a full transcription of his biggest hit, The Thrill Is Gone, courtesy of guitar dynamo Guthrie Govan.

In addition to the DVD and magazine, included in the pack are four A4+ size art cards featuring the great man himself at various points in his career, as well as his ever-present Lucille, and a gig poster from his earliest days as 'Blues Boy' King.

Guitarist Presents BB King: King Of The Blues is available now from selected newsagents priced £14.99 or from MyFavouriteMagazines.co.uk - this is a limited edition package, so get it while stocks last!