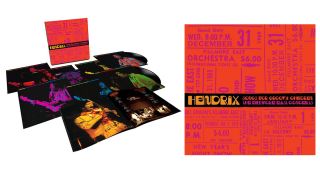 Jimi Hendrix's four debut concerts with his Band Of Gypsys lineup at New York's legendary Fillmore East are to be released in a deluxe five-CD or eight-vinyl box set.

The performances, which feature Billy Cox on bass and Buddy Miles on drums, see Hendrix stretch his wings, taking his freewheeling rock sound and bringing soul, funk and R'n'B into the mix. The Band Of Gypsys album, released in 1970, and memorable for its bravura rendition of Machine Gun, collected six of tracks from his New Year's Day show at the Fillmore East.

But Songs For Groovy Children: The Fillmore East Concerts collects all of the sets, sees them remixed by Eddie Kramer, and ordered chronologically by performance.

Many of these tracks have never seen the light of day before, at least not commercially, and it is a document of Hendrix's evolution in what was a tumultuous time with the original Jimi Hendrix Experience lineup disbanding and uncertainty over who would be on bass and drums as he headed into the 1970s.

Two of the shows on Songs For Groovy Children took place on New Year’s Eve 1969, with two on New Year's Day. At that time, Hendrix's star was such that he could staged these at Madison Square Garden, which he had sold out earlier on 18 May, but the Fillmore East was preferred for a live recording. That there was to be a live recording arose out of an old contractual obligation Hendrix had with PPX Industries, out of which Capital would take the distribution rights. Hendrix scheduled the shows and delivered a live album.

The lineup didn't last into the following month, but the music did, and collected here, and in sequence, it's ripe for rediscovery.

The box set also includes extensive liner notes and photography from the Fillmore East's Amalie Rothschild, Jan Blom (whose took the photo for the Band Of Gypsys album cover) Marc Franklin from Marshall.

Songs For Groovy Children is available to preorder and will be released on CD and digital on 22 November, with a vinyl release following on 13 December. Preorder the digital release and receive the bonus track Message To Love.