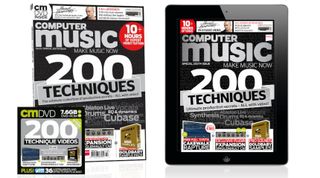 All editions INCLUDE software, samples, video* and more - seedownloads FAQ.

In this issue's HUGE tutorial spectacular, we reveal an incredible 200 essential music production techniques, tricks, tips and studio secrets… with expert video demonstration and explanation for each and every one!

Check out this sample videofrom the article - there's another 199 techniques to discover in the full guide!

Every issue of Computer Music comes with CM Plugins, an exclusive collection of pro-quality VST/AU instruments and effects for PC and Mac. Check out our fullCM Plugins listand theCM Plugins FAQfor more info.