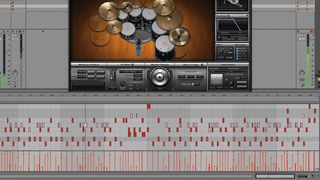 A drum fill is a short phrase dropped into the main groove of a drum track every eight or 16 bars (generally speaking) in order to energise the transition between sections of a song (verse to chorus, for example) or individual sub-sections within a section (bar 4 of the middle 8, for example.

That description probably makes them sound more coldly functional and 'secondary' than they actually are, when in fact a drum fill can be every bit as characterful and memorable as the groove around it, whether it's just a few snare hits or a full-pelt rip around the whole kit.

Step 1: Every element of the drum kit is fair game when it comes to fills, but before we get into mixing them all up, let's look at their relevant strengths. First, and perhaps foremost, the snare drum. When you want to keep things simple and high-impact, the snare is the drum to reach for. Here it is playing two classic short, phrase-marking fills, the second a pair of flams.

Step 2: Employing drags, rolls and grace notes stops snare fills sounding undynamic and lifeless. Check out the rolls leading into the main hits in the second of the two fills in this example. When programming rolls, be careful not make them unrealistically fast. Also crucial to the realism of snare fills is mixing up regular hits and rimshots, as demonstrated in both examples.

Step 3: Generally speaking, the kick drum plays a supporting role in fills, accompanying cymbal crashes and providing 'punctuation'. However, double kick drums - a staple of hard rock and metal - are a whole 'nother ballgame, enabling snare drum-style patterns to be played with the feet. Here's a simple single-kick fill followed by a rather more animated double-kick one.

Step 4: Tom toms are actually called on more for fills than grooves, giving the drummer the ability to play semi-melodic phrases. Their potential usage in fills is endless, but here are two straightforward examples: the first is a simple run from the snare round both rack toms and the floor tom; the second is an embellished extension of the same thing, including flams between pairs of toms.

Step 5: While closed hi-hats don't have much of a role in the average fill, hi-hat 'kicks' (where the hats are closed shortly after being struck half open) are ideal for adding bite to kick and snare hits. The crash is frequently deployed as a power-up for the snare, invariably accompanied by a kick drum. Lastly, the ride cymbal is probably the least likely part of the kit to find its way into a fill, except in jazz.

In this tutorial, we'll take a quick tour of the drum kit and discuss how each element is used in the context of drum fills. For the full cm Guide to Drum Fills, pick up the July issue of Computer Music (CM231).